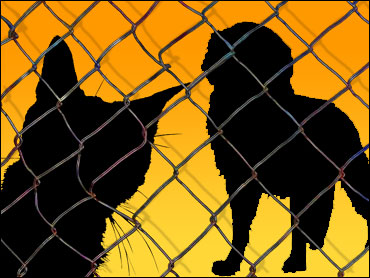 PHOENIX - Some outraged donors are threatening to pull their support for the Humane Society after it euthanized the beloved cat of a former heroin addict hours after he brought it in for medical treatment.

The Arizona Republic reports that Daniel Dockery's 9-month-old cat, Scruffy, was put down not because of cuts it got from a fence but because the 49-year-old Phoenix man couldn't immediately pay $400 for its care. (Scroll down to see video).

Dockery said that he reluctantly surrendered the cat to the Humane Society on Dec. 8 after clinic staff declined to take a credit card from his mother over the phone or wait 24 hours for her to wire him cash. They told him that the cat only would be treated if he signed over ownership, he said.

Dockery searched for the cat for three weeks at agency shelters and repeatedly asked staff what had happened to Scruffy but learned Tuesday that the cat was euthanized a few hours after he brought her in.

"Now I've got to think about how I failed that beautiful animal," Dockery said. "I failed her. ... That's so wrong. There was no reason for her not to be treated."

Humane Society spokeswoman Stacy Pearson said the agency took Scruffy intending to treat it and put it in foster care, but when she was taken to a second-chance clinic with three other cats, doctors were only available to treat two of them.

"It was never intended for that cat to be euthanized," she said. "This truly is a worst-case scenario ... and it is one the Arizona Humane Society must deal with every day."

She said that if Dockery paid for the treatment or the clinic had accepted his mother's credit card by phone, Scruffy would not have been taken to the second-chance clinic.

The Humane Society said it is reviewing its credit-card policy because of what happened to Scruffy.

Dockery said that for the past nine months, Scruffy has been his closest companion and has helped him stay off drugs for more than a year, the longest stretch he's ever been clean.

A recovering heroin addict with a lengthy prison record, Dockery has a handful of friends and a caretaking job in Phoenix that provides him with room and board.

He said that as he hand-fed Scruffy even before she opened her eyes at 4 days old, he found that he was nursing his own way back into society. He raised money to have Scruffy spayed. The kitten ate from fresh cans of tuna and slept on Dockery's pillow at night.

Dockery's mother, Donna Koning, of Muskegon, Michigan, said she believes that when her son told the Humane Society workers that he didn't have a real job, they assumed Dockery was homeless and couldn't care for an animal.

"Don't you have enough animals in the shelter that you would not want to take a beloved pet from someone who clearly cares for it?" she asked.

A Republic story on Saturday about Dockery's search for Scruffy led to an outpouring of support, as more than 150 people emailed and called to offer Dockery financial help, new kittens and free veterinarian services.

Residents also expressed outrage on the Humane Society's Facebook page, which was flooded with messages from donors threatening to pull donations.

"Shame on you!" wrote several people.

More from Call 12 for Action in Phoenix: