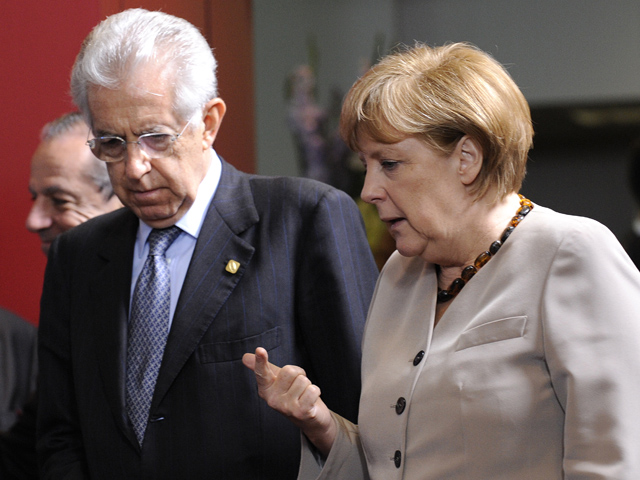 (AP) BRUSSELS - European leaders agree more needs to be done to stimulate growth and regulate banks, though sharp divisions remain over the issue of pooling government debt as a way to ease the continent's financial crisis.

At the start of a two-day European Union summit, European Commissioner for Economic Affairs Olli Rehn signaled that leaders would likely agree on $161 billion in spending geared towards job creation, as well as some new measures that might reassure investors that Spain and Italy will be able to manage their debts.

"I expect that there will be a decision on a further step toward rebuilding the economic and monetary union," Rehn said shortly before the summit began. "We also need concrete decisions on a short-term stabilization of financial markets, especially sovereign debt markets."

The EU leaders will issue Thursday before holding a dinner and more talks, which are expected to last well into the night.

German Chancellor Angela Merkel has rejected the most obvious way of reducing borrowing costs for the southern European countries: by quickly issuing "eurobonds," or debt backed by all countries.

She says eurobonds should be part of Europe's effort to integrate, but can only happen once national governments have agreed to give a central authority the power to change their budget policies. That could take years.

As the biggest economy among the 17 countries that use the euro, Germany would have to shoulder the brunt of the debt, and Merkel has been reluctant to expose German taxpayers. She is also concerned it would ease the pressure on financially weaker countries to reform their economies. That includes making labor markets more flexible, lowering business costs, cutting red tape and fighting tax evasion. Spain also needs to force its banks to cover massive losses from an imploded real estate markets.

"I think we should stop talking about eurobonds now because, with the German government's 'no,' with this definitive 'no' from Mrs. Merkel, eurobonds are now a non-issue," the president of the European Parliament, Martin Schulz, said Thursday.

While pressure on Merkel has been building, she is not alone in her opposition to eurobonds. Austria, Finland and the Netherlands are also opposed, among euro countries.

He said that the only way for Spain and Italy out of this crisis is to keep cutting government costs and reforming their economies, though he signaled the Netherlands is willing to let them tap one of Europe's bailout funds if they request aid.

Five euro countries have so far asked for financial aid from their partners in the currency union. Greece, Ireland and Portugal have taken rescue loans to finance their government debt. Spain has asked for as much as â,¬100 billion for its banks. Cyprus has asked for aid for its banks, as well.

Europe's bailout funds have X billion left to help rescue countries or their banks. That would not be enough to bail out the Spanish or Italian governments.

Investors are looking for signs of a clear strategy to deal with the debt crisis, which is weakening economies across Europe, including Germany's. They are not hopeful, though, and sold off stocks across Europe on Thursday.

"The good news is that this time around expectations are very low; the bad news is that the main players seem to be diametrically opposed when it comes to a strategy for ending the crisis," said Gary Jenkins, managing director of Swordfish Research, a London-based consulting firm.

The French plan to stimulate growth, and thereby increase government tax revenues, is relatively modest. Although worth $162 billion, it is expected to consist mostly of European funds already earmarked for development.

Far more urgent is finding a way to keep the cost of borrowing money sustainable for weaker euro countries. Economists say Spain can only pay the current high rates - at 7 percent for 10-year money- for a few more months. After that, it is likely to ask for a eurozone bailout to finance its debts. That rescue money could range in the hundreds of billions of dollars.

The leaders of Italy, France and Spain have been pressing Germany to agree to share debts before that happens. The EU's top officials and the International Monetary Fund have argued the same.

Italy's Prime Minister Mario Monti, at risk of losing his job because of voter frustration with budget cutbacks, said that Italians have made great sacrifices and gotten their country's deficit under control but the yields on Italian debt have soared to anyway. Italy's deficit was 3.9 percent of GDP as of the end of 2011, far lower than Spain's 8.5 percent. But its 10-year yield was above 6 percent.

Monti warned that if Italians become discouraged, they could turn against the idea of European integration, which the country has so far mostly embraced. That, he said, "would be a disaster for the whole of the European Union."

His government has asked for up to $126 billion in eurozone loans for the country's banks, which are sitting on massive amounts of soured real estate loans. The government, however, will be ultimately responsible for repaying the money. If the government cannot get all the money back from the banks, it will face new costs, adding to its debt. That has spooked investors, who are demanding high rates to lend the country money.

"The most urgent issue is financing," Mariano Rajoy said.

Simon Tilford of the Center for Economic Reform noted there is a greater readiness among the the French, Italians and Spanish to act as one, without Germany. In the past, they were reluctant to isolate Merkel.

"They have grown alarmed and frustrated," he said. "If anyone is to lead the charge, it may be Monti. He is the one who has the most credibility on the European stage."

If Merkel and Monti do end up on opposite sides at the negotiating table, it will be fitting: Germany and Italy are squaring off in the semifinal of the European football championship this evening.

There are no televisions, however, in the room where the leaders hold their meeting, which is chaired by European Council President Herman van Rompuy.

Even if the debate gets heated it should remain civil. Each leader must raise a paperweight with his country's name and flag when he or she wishes to speak.

While France has been the traditional counterweight to Germany in European dealings, President Francois Hollande has just seven weeks of governing under his belt, and built his career as a consensus-builder. And his country's economy is weaker, with growth forecast at just 0.4 percent this year. Germany expect growth of 0.7 percent.

Hollande was grinning broadly Wednesday night at the one concession he has been able to wring from Merkel so far, an agreement to put growth on the European agenda alongside austerity measures.

Merkel, standing stiffly at Hollande's side ahead of bilateral talks in Paris, agreed to push for the $162 billion stimulus package that Hollande has vaunted, even though it is largely just a re-packaging of existing EU funds.

Even if leaders of all 26 other EU nations line up against Merkel, she cannot bend very far.

She needs the German Parliament to approve the eurozone's permanent rescue fund, the European Stability Mechanism, and a European budget-discipline pact, both expected to happen Friday. And many measures floated as possible solutions could require changes to Germany's constitution.

Amid calls for Greece or other Mediterranean states - and even Germany - to pull out of the euro, Merkel argued Wednesday for greater unity.

"We need more Europe. Markets are waiting for that."