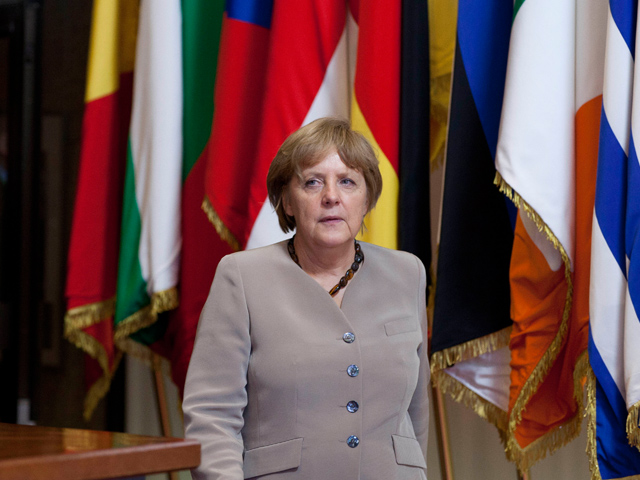 (AP) BRUSSELS - After 18 disappointing summits, Europe's leaders appeared Friday to have finally come up with a set of short-term measures and long-term plans that show they are serious about solving their crippling debt crisis.

Meeting for the 19th time since the debt crisis exploded, leaders of the 17 countries that use the euro currency agreed they will let funds intended to bail out indebted governments funnel money directly to struggling banks as well. They said the move will "break the vicious circle" of bank bailouts piling debt onto already stressed governments.

The decision is a victory for Spain and Italy, whose borrowing costs have risen to near unsustainable levels despite their efforts to cut spending and reform their labor markets.

In Germany, Chancellor Angela Merkel is likely to face a grilling from a skeptical German Parliament later. Heading into the summit, Merkel had stuck to her line that any financial help from Europe's bailout fund must come with tough conditions, so the decision allowing easier access without countries was widely seen as a defeat by the German press.

Merkel insisted the funds will still only be released when it is clear countries are undertaking serious reforms.

"We remain completely within our approach so far: Help, trade-off, conditionality and control, and so I think we have done something important, but we have remained true to our philosophy of no help without a trade-off," Merkel told reporters in Brussels.

Leaders of the full 27-member European Union, which includes non-euro countries such as Britain and Poland, also agreed to a long-term framework toward tighter budgetary and political union, though those plans will require treaty changes and won't be realized for years.

The scale of the moves were unexpected and provided investors a reason for optimism, even as analysts cast doubt on the plans' feasibility and noted that some fundamental problems with the common currency remain.

"I think the elements we put together will reassure the markets," said Eurogroup President Jean-Claude Juncker.

Stocks around the world surged Friday, with markets in countries on the front line of the crisis doing particularly well. Italy's FTSE MIB and Spain's IBEX indexes each rose 3 percent.

Perhaps more importantly, the yield on Spain's 10-year bond dropped by 0.32 percentage points to 6.58 percent. Italy's was down by 0.14 percentage points to 5.94 percent. Both countries have seen their rates edge toward the 7 percent level which is seen as unsustainable over the long term.

The importance of recapitalizing banks directly from the bailout fund became evident this month when Spain was offered 100 billion euro ($125.6 billion) for its shaky banks. Previously the bailout loan would have to be made to the Spanish government, which would lend it on to the banks. The prospect of having that debt on the government's books spooked investors, who began demanding higher interest rates to reflect the risk of a Spanish default.

Lending the money directly to the banks avoids putting more debt on the government's books.

Analysts remain skeptical about whether the moves will be enough to fix Europe's debt crisis, especially as the amount of money available to help in the crisis - some 500 billion euro - is dwarfed by the amount of debt across the continent. Italy alone has outstanding debt of 2.4 trillion euro.

"These steps are the obvious ones to take to try to restore some confidence in the market in the short term," said Gary Jenkins, managing director of Swordfish Research in London. "Alone, they do not solve the underlying problems but they might buy a bit of time, which is probably about the best they can do right now."

European Central Bank President Mario Draghi, who is to be given additional powers to oversee the bailout funds by July 9, and to oversee big European banks by the end of the year, said he was "very pleased" with the result of the discussions.

Though welcoming the measures that were taken, analysts think more will have to be done.

"If the aim is to take to ease tensions on the Italian and Spanish bond market on a more sustainable basis, we probably will need to have more assurance on the fire power," said analyst Carsten Brzeski of ING in a note.

Brzeski said more liquidity support from the ECB "looks inevitable" and may come as soon as Monday.

As well as trying to fix the euro, the EU leaders also agreed to devote 120 billion euro in stimulus to encourage growth and create jobs, though half of it had already been earmarked and it includes only 10 billion euro in actual new commitments. France had pushed for the growth package, arguing that austerity measures are stifling growth and making things worse.

The 27 leaders of the EU agreed on "four building blocks" of a tighter union - but postponed specifics until a study due in October. The building blocks, which include sharing debt in the form of jointly issued Eurobonds, were laid out in a sweeping document presented by Van Rompuy and colleagues before the summit.

Van Rompuy said the report would be "a specific and time-bound roadmap for the achievement of a genuine economic and monetary union."

"The aim is to make the euro an irreversible project," he said.

He did not say, however, whether the general agreement on the tighter union included any commitment on eurobonds from Germany and other stronger economies that have firmly opposed sharing debt with more profligate countries such as Greece.

One key factor in the negotiations was that France's president Francois Hollande appeared to turn against Merkel and lobbied instead on behalf of the southern states frustrated at the failure of austerity measures to solve their problems.

"The best way to get other people to move is to move yourself," he said.

Germany and France have been the traditional drivers of European policy, but the Socialist Hollande and conservative Merkel differ over how to tackle this crisis.