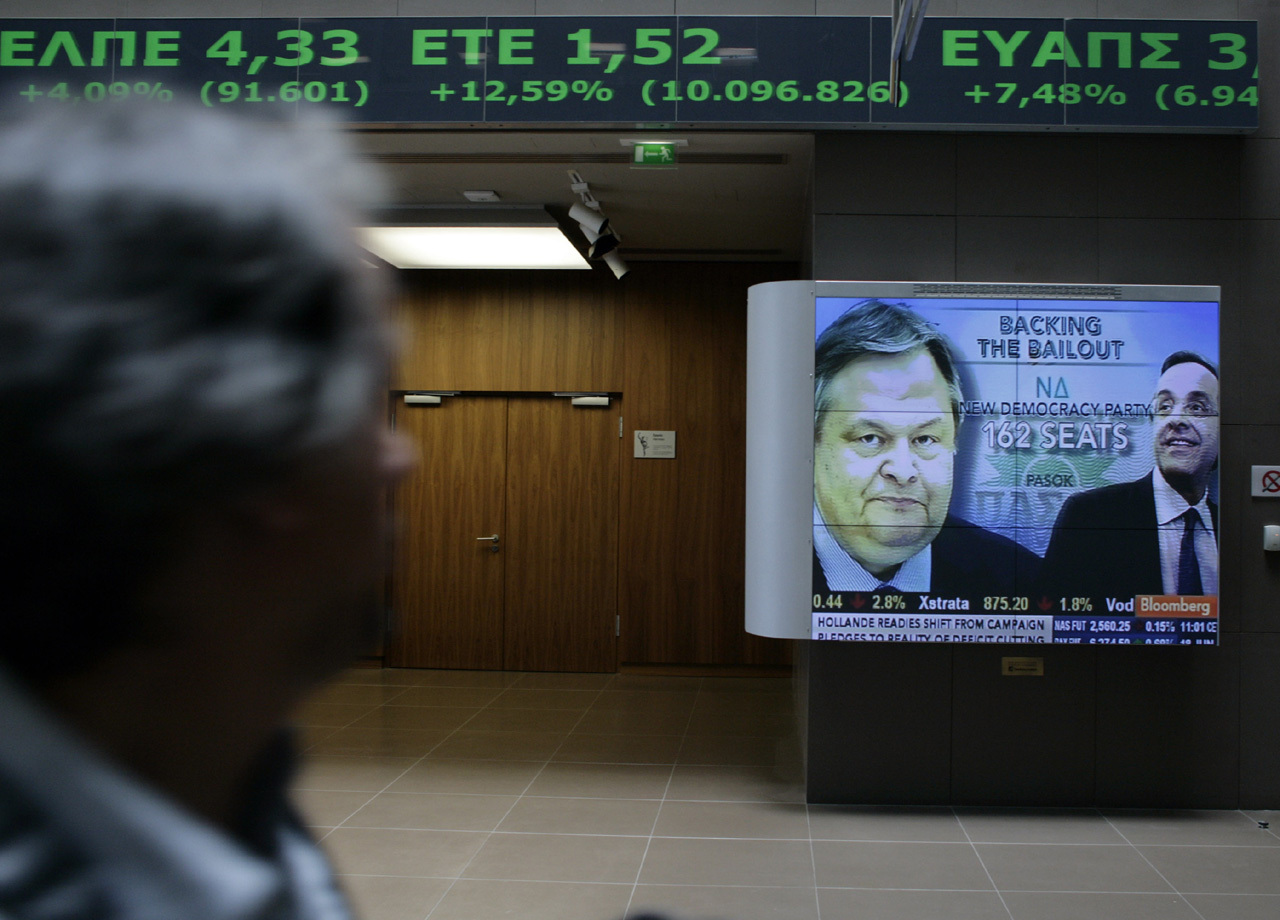 The campaign was watched closely by global leaders and markets, while central banks stood ready to intervene in case of financial turmoil — as Sunday's election was seen as a vote on whether Greece should stay among the 17 nations that use the euro.

A Greek exit would have potentially catastrophic consequences for other ailing European nations; the fallout would hit the United States and the entire global economy.

Europe's financial markets are giving up early gains after a solid day for the Asian markets. It is a sign that investors need time to rebuild confidence after Sunday's critical election in Greece.

For many, this election was seen as a referendum on Greece's future in the European Monetary Union - a choice between the anti-austerity Syriza party, who promised to rip up the bail-out plan, and the central-right New Democracy party, who vowed to keep Greece in Europe at all costs.

"Today the Greek people expressed their will to stay anchored with the euro, remain an integral part of the eurozone, honor the country's commitments, and foster growth," New Democracy leader Antonis Samaras said.

After Samaras declared victory last night, newspaper headlines described the results as a "breath of relief."

On Monday the head of Greece's socialist PASOK party said the country needs to form a government fast, and that negotiations for a coalition must be completed by the end of Tuesday.

Evangelos Venizelos, a former finance minister, said that the "broadest possible" consensus must be found between the parties that won parliamentary seats in Sunday's election.

Both the New Democracy party and PASOK (which came in third) have said they will stick to Greece's international bailout commitments, although they want to renegotiate some of the harsh austerity terms taken in return for the international rescue loans.

CBS News correspondent Clarissa Ward reports the mood in the nation is indeed one of relief rather than jubilation. For many people, New Democracy was simply the "least worst option."

To watch Clarissa Ward's report click on the video player above.

It will not be an easy road. After five consecutive years of recession, almost one-quarter of Greeks are unemployed, and the specter of renewed street riots hangs over the country.

And the next government will face an emboldened opposition from Syriza, led by charismatic 37-year-old Alexis Tsipras, despite his party's loss vowed last night that the people would keep up the fight against austerity.

Now the real trouble begins. New Democracy needs to form a coalition government, which is something that they were unable to do after the last election. But with Greece's money running out quickly, there is a sense that this needs to get done, and it needs to get done now.

Ward also says that there is a sense of impatience among Greeks, having given Sunday's election victors a "limited mandate."

"The people of Greece have had enough, they can't take any more of this austerity and they need to start seeing changes soon," Ward told "CBS This Morning."

Asian stock markets climbed early Monday on the news of the conservative New Democracy party's strong finish, as did those in Greece with Athens stocks gaining 5.4 percent in early midday trading.

Sunday's vote "will probably ease fears of an imminent Greek euro exit," said Martin Koehring of the Economist Intelligence Unit. "But the key question is how quickly can a government be formed?"

With 129 of Parliament's 300 seats, New Democracy lacks enough legislators to govern alone, and must seek allies among the pro-bailout Socialists, who came third.

But the deal that evaded Samaras after first elections on May 6 looks more attainable this time. With the Socialists' backing he would control 162 seats, and could seek a further boost from the small Democratic Left party. While opposing the country's harsh austerity program, that party has said it will do what is needed to help form a strong government.

Samaras received the presidential mandate to start power-sharing talks on Monday, and he will have three days in which to build a coalition.

He said he would meet in the afternoon with leaders of all parties "that believe in Greece's European orientation and the euro."

Final results presented to President Karolos Papoulias gave New Democracy 29.66 percent, followed by the Syriza radical left coalition at 26.89 percent. The extreme far-right Golden Dawn party, whose members have been linked with violent attacks on African and Asian immigrants, came fifth with 6.92 percent; it won 18 seats — down from the 21 it collected on May 6.

Greece has survived for more than two years on rescue loans from its European partners and the International Monetary Fund. The vital bailouts are conditional on the country continuing with its deeply unpopular package of spending cuts, and pushing through new structural reforms.

A statement late Sunday by Luxembourg Prime Minister Jean-Paul Juncker, who heads the eurogroup, said representatives of the EU, the IMF and the European Central Bank would visit Athens soon to discuss the way forward.

If Greece's funding is cut off, it will rapidly run out of cash as the government still spends much more every year than it receives in taxes and other revenues. That would create such practical difficulties that Athens could ask to leave the euro, adopting a deeply devalued local currency that would boost competitiveness — but at the same time wipe out savings and send the cost of vital imports sky-high.

Syriza, which campaigned on a promise to renege on the bailout commitments, has ruled out cooperation with Samaras.

Speaking shortly after the result was announced, Samaras said Greeks voted to stay in the euro, foster growth and respect the country's international commitments.

"This is a victory for all of Europe," he said. "I call upon all political parties who share these objectives to join forces and form a stable new government."

"We will work together with our partners in Europe in order to supplement the current policy mix with growth enhancement policies," he said. "We are determined to do what it takes and do it fast."

"The country cannot waste a day," the paper said. "It is clear from the arithmetic that after New Democracy's victory a government can even be formed by two parties. But from a political viewpoint that will not suffice. All parties that say they believe in the country's European future must actively prove their respect for the message of the elections."

"Practically a fascist party, Golden Dawn, has from now on established itself in Parliament," she said. "For me, that's what hurts."

The United States welcomed Sunday's result. "We hope this election will lead quickly to the formation of a new government that can make timely progress on the economic challenges facing the Greek people," the White House said in a statement.

Power-sharing negotiations could be tough. The head of Syriza has ruled out joining any coalition. When Tsipras phoned Samaras on Sunday night to congratulate him on his victory, he vowed that his party would remain outside the government.