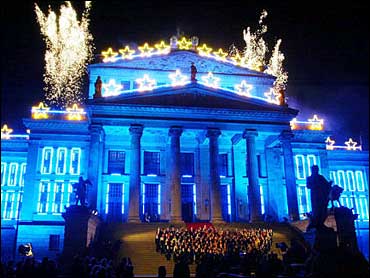 The European Union expanded at midnight Friday to take in a region isolated during the Cold War, creating a 25-nation economic giant with the potential to rival the United States. Church bells rang and fireworks exploded over eastern Europe in celebration.

Ten countries joined the EU in a historic enlargement taking in a broad swath of the former Soviet bloc — a region separated for decades from the West by barbed wire and ideology — and widening to 450 million citizens.

Hundreds of thousands of jubilant revelers packed city squares in the newcomer nations, whose entry after overcoming tyranny 15 years ago was hailed by EU leaders as "the end of the artificial divisions of the last century."

The EU's biggest expansion in its 47-year history brings in eight formerly communist countries — the Czech Republic, Estonia, Hungary, Latvia, Lithuania, Poland, Slovakia and Slovenia — along with Cyprus and Malta.

Heads of state were gathering in Ireland, which holds the rotating EU presidency, for a formal "Day of Welcomes" in Dublin on Saturday.

"For me, it's a great day," said Lenka Sladka, 24, a Prague university student. "Now we can freely travel or study everywhere. My parents could not even dream of it."

"It's a day that we will read about in history books," said Eliza Malek, a 17-year-old celebrant in Warsaw, Poland.

Enlargement stirred strong emotions both in the "new" Europe — so dubbed by U.S. Defense Secretary Donald H. Rumsfeld before the U.S.-led war in Iraq, which most of the newcomers supported — and in the "old."

The EU flag — a circle of yellow stars on a blue field — went up Friday outside the presidential palace in tiny Slovakia, where parliament speaker Pavol Hrusovsky delivered a stirring reminder of how far the country has come since shaking off communism.

"In 1989, we cut up the barbed wire. Pieces of this wire have for us become a symbol of the end of the totalitarian regime," he said. "For the generation which lived in captivity of the barbed wire, the EU means a fulfillment of a dream."

French Prime Minister Jean-Pierre Raffarin said he gets misty just thinking about it.

"I get tears in my eyes," he said while meeting with students from the 10 new countries. "I am part of a generation that believes in Europe. Europe is the force that prevents hate from being eternal. We must open our hearts to this new Europe."

Enlargement signals a "completely new chapter" in relations between Germany and Poland that were blackened by the Nazi occupation, German President Johannes Rau said in a landmark speech to the Polish parliament.

In the German town of Zittau, "E-Day" festivities were held in a grassy meadow on the Neisse River where Germany meets Poland and the Czech Republic. Makeshift pontoon bridges, festooned with national and EU flags, were set up to link the three neighbors.

But the jubilation was tinged with frustration: fears in the newcomer nations of a loss of national identity and steep price increases, and worries in the EU's core 15 member states of a crush of immigrants as national borders gradually disappear.

Bomb threats forced the closure of a key border crossing between the Czech Republic and Germany for more than four hours Friday. Leftist protesters marched in Berlin for "communism instead of Europe," and a group of avowed Czech "Euro-skeptics" planned a mock funeral Saturday to "bury" the country's sovereignty.

"Joining the EU is a necessary evil," said Zsolt Meszaros, 35, a Budapest doctor. "There are just too many uncertainties in all of this to make me more enthusiastic."

Chancellor Gerhard Schroeder sought to allay concerns among Germans that lower-paid workers from Poland and other eastern countries would threaten their jobs. Greater trade across the enlarged Europe "will make us not poorer, but richer," he said in a nationally broadcast speech.

Enlargement was born of "centuries nourished by intolerance, conquests and war," European Commission President Romano Prodi told a ceremony at a town on the Slovene-Italian border.

In Lithuania, people used powerful searchlights, bonfires, lamps and even candles in a bid to make their country "the brightest in Europe." An American satellite was photographing the region and beaming the images back.

"I don't remember what the Soviet Union was like, but I really enjoy the European Union that Lithuania is joining," said Jurate Rudyte, 17, who wore an EU flag as a scarf and danced with her friends at a concert in the capital, Vilnius.

The mood was muted in Cyprus, which remains divided between ethnic Turks and Greeks. Cypriots in the Greek-controlled south decorated the main square in the capital, Nicosia, with EU flags, and musicians from around the world performed into the night.

But no celebrations were planned in the Mediterranean island's Turkish-occupied north, where EU benefits and laws will not apply after Greek Cypriots rejected a U.N. reunification plan.

In Hungary, where church bells nationwide tolled at midnight, an exuberant Prime Minister Peter Medgyessy hailed his country's return to the European mainstream.

Hungary "was always at the gates of Europe," he said.

"The significant difference is that now we are inside the gates."