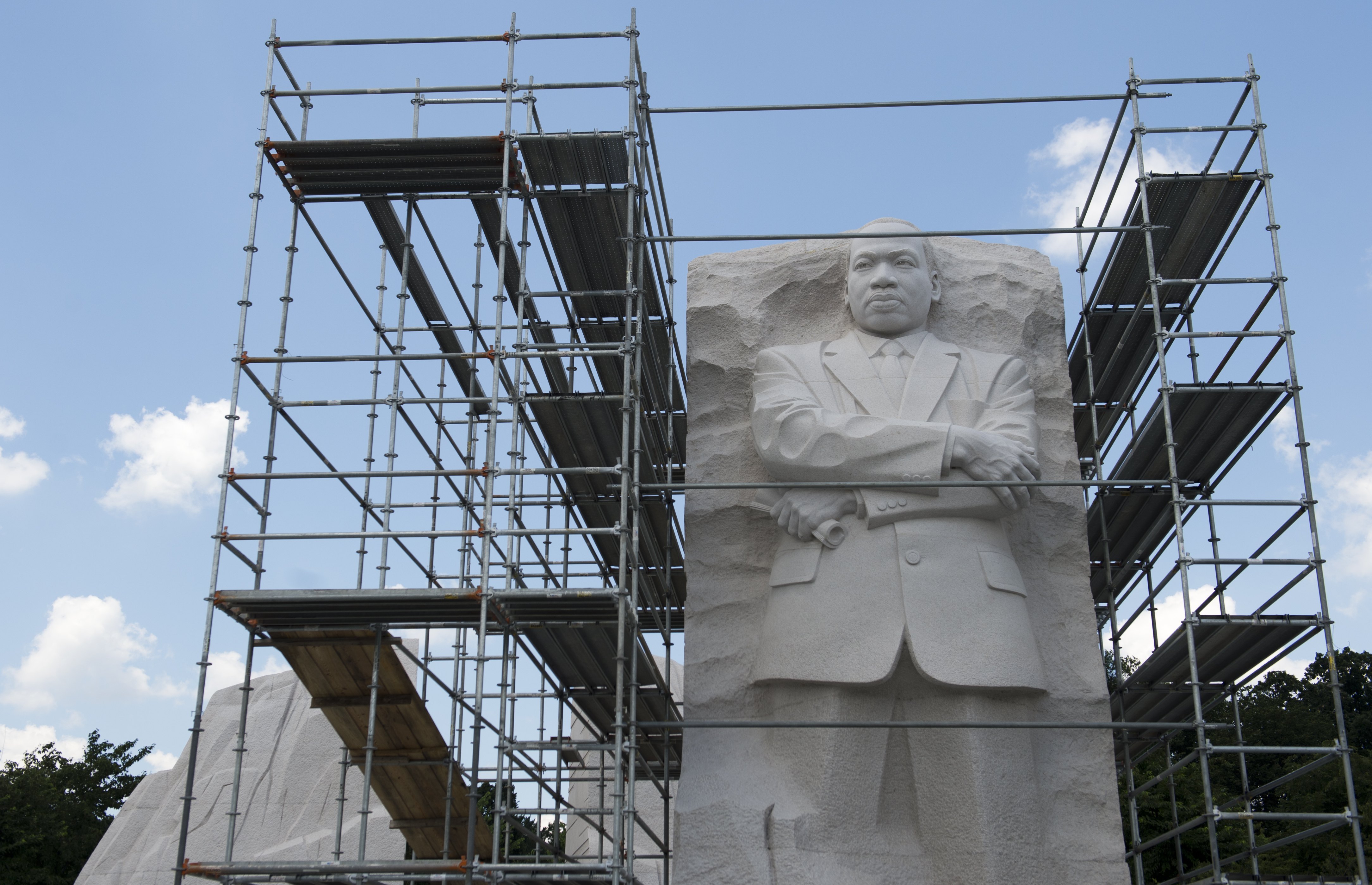 The Martin Luther King, Jr. Memorial in Washington, D.C. was a long time coming. First proposed 27 years ago, it opened in August 2011, 48 years after King delivered his iconic "I Have a Dream" speech during the 1963 March on Washington.

Despite the fanfare that attended the monument's unveiling, however, some keen observers noticed that one of the quotes on the statue attributed to King was incorrect. And now, as the 50th anniversary of King's March on Washington approaches, the sculptor who originally fashioned the memorial arrives in the nation's capital this week to begin removing the erroneous quote. Workers began erecting scaffolding around the statue last week to prepare the monument for its makeover.

The renovation won't simply be a matter of papering over the mistake, as former Interior Secretary Ken Salazar explained in a 2011 statement.

"The updated plan calls for removing the quote by carving striations over the lettering to match the existing scratch marks on the sculpture," he said. The memorial shows King's statue - the "Stone of Hope" - thrusting forth from the "Mountain of Despair" behind him. The striations along both sides of King's statue represent the tearing of King's likeness from the mountain. Sculptor Lei Yixin will remove the quote by carving additional striations in its place.

"The plan to remove, instead of replace, the quote was recommended by the original sculptor...as the safest way to ensure the structural integrity of the memorial was not compromised," Salazar explained.

The offending inscription currently adorning the statue - "I was a drum major for justice, peace, and righteousness" - is a paraphrased version of one of King's more famous lines, delivered during a sermon at an Atlanta church in which King discussed how he might be eulogized after his death.

And what a difference a few words can make. In the eyes of some, the abridged quote made King seem self-important.

"He had no arrogance at all," she explained. "He had a humility that comes from deep inside. The 'if' clause that is left out is salient. Leaving it out changes the meaning completely."

When Angelou was told the quote was paraphrased to be able to fit into the allotted space on the statue, she fired back, "Too bad."

The inaccuracy "minimizes the man," she said. "It makes him seem an egotist."

The memorial's chief architect, Ed Jackson, Jr. told the Post that the quote was originally planned for the statue's south face, but after sculptor Lei Yixin told the team he had prepared the north face for that particular inscription - and that the full quote would not fit - they decided to inscribe the shortened version of King's quote.

"We sincerely felt passionate that the man's own eulogy should be expressed on the stone," Jackson said. "We said the least we could do was define who he was based on his perception of himself: 'I was a drum major for this, this, and this."

Whatever explanation the design team provided at the time, they won't need to justify their decision much longer.

King's family members have voiced their approval of the renovation proposal. His youngest daughter, Bernice A. King, said she was "grateful" federal officials have "taken such care to maintain the spirit and appearance of such an important monument to our country's history and my father's memory."

Dr. Christine King Farris, King's sister, added, "While our family would have of course preferred to have the entire 'Drum Major' quote used, we fully endorse and support" the planned refurbishment.

The National Park Service has promised the monument will be open to the public throughout the renovation, and that work will be completed before August 28 - the 50th anniversary of King's March on Washington.