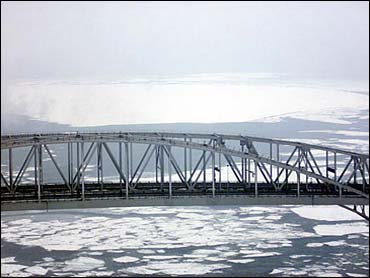 Lake Huron and Lake Michigan are losing vast amounts of water because of erosion from a decades-old dredging project, according to a new study.

The lakes, connected geologically, saw levels drop when a commercial navigation channel was dug at the bottom of the St. Clair River in 1962, boosting the flow south toward Lake Erie.

But, according to a report issued Monday, previously undetected erosion has made the channel more than 60 feet deep in some places — twice as deep as needed for shipping.

"We've got something very alarming going on here," said Rob Nairn, who wrote the report for W.F. Baird & Associates, an international coastal engineering firm. "The recent riverbed erosion is unprecedented, even on a geologic time scale."

According to the report, riverbed erosion has contributed to a decline of 8 to 13 inches in the Huron-Michigan water level in the past three decades.

It continues a trend dating to about 1860, when the first channels were dredged on the St. Clair River. Since then, levels on the lakes have fallen a total of 32 inches, the report said, and the problem only will worsen unless corrected.

The $200,000 study was commissioned by the Georgian Bay Association, a group representing about 17,000 people who live on the islands and coasts of the sprawling bay on the eastern side of Lake Huron.

Declining water levels in recent years have disturbed members who wanted to know whether the drop was caused by something other than usual cyclical fluctuations, said John Pepperell, the group's president.

"We have to stop treating the Great Lakes as though they can be literally molded to fit our short-term economic desires," said Jennifer Nalbone, habitat and biodiversity coordinator for Great Lakes United, a U.S.-Canadian group.

Government officials said they need more time to study the report but noted Great Lakes levels have fluctuated constantly for a variety of reasons since the mid-1800s.

Scott Thieme, chief of hydrology with the U.S. Army Corps of Engineers in Detroit, acknowledged that something seems to be causing a disparity in water levels between Huron-Michigan and the lakes into which their water flows — Erie and Ontario.

But he said his agency wanted to examine other potential causes that the report dismissed, such as "glacial rebound," the gradual rise of large land masses that were depressed by the weight of glaciers during the Ice Age.

The International Joint Commission, an agency that advises the Canadian and U.S. governments on Great Lakes policy, has received the report and was studying it, spokesman Frank Bevacqua said.

"We take the report very seriously but we're currently in noh position to either refute the findings or confirm them," he said.

The Army Corps and Transport Canada also are studying future prospects for Great Lakes navigation, including more dredging. Environmentalists, however, said the report shows that would be unwise.

Jim Weakley, president of the Lake Carriers' Association, said the group would oppose any effort to halt dredging.

"We need the water at certain depths to keep the cargo moving," Weakley said. "As far as I'm concerned, dredging and maintaining water levels are not mutually exclusive."