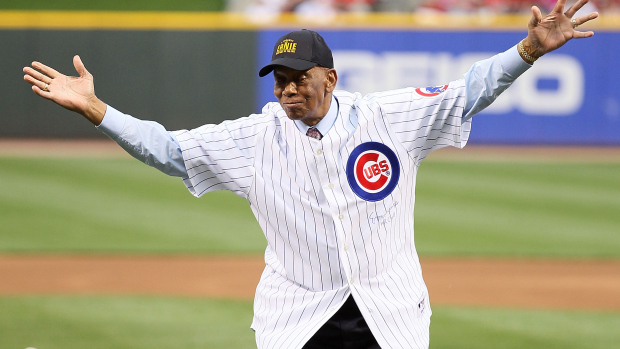 The announcement came Friday evening from attorney Mark Bogen, who said he was authorized by Banks' widow to confirm the news to the media.

"Words cannot express how important Ernie Banks will always be to the Chicago Cubs, the city of Chicago and Major League Baseball. He was one of the greatest players of all time," Tom Ricketts, Chairman of the Cubs, said in a statement. "He was a pioneer in the major leagues. And more importantly, he was the warmest and most sincere person I've ever known."

Known for his fun-loving, positive attitude, Banks grew up in segregation and played his first years of professional baseball in the Negro Leagues with the Kansas City Monarchs, CBS Sports reported. He also served in the Army during the Korean War.

The 12-time All-Star and two-time MVP led the National League in homers and RBI twice each and is still one of the best power-hitting shortstops in history -- though he moved to first base for the second portion of his career due to knee issues.

In 1977, Banks was inducted into Baseball's Hall of Fame in his first ballot, receiving 83.8 percent of the vote.

With Banks, though, the stats only tell a portion of the tale. His infectious personality won over the hearts of Cubs and opposing fans alike for years, despite him being stuck on so many bad Cubs teams. "Let's play two," he liked to say, suggesting a doubleheader was always better than just a single game in one day.

In an interview with the Houston Chronicle, Banks explained the catchphrase dated back to a day in July 1969.

"It was about 105 degrees in Chicago and that's a time when everybody gets tired. I came into the clubhouse and everybody was sitting around and I said, 'Beautiful day. Let's play two!' And everybody looked at me like I was crazy. There were a couple of writers around and they wrote that and it stayed with me."

For all of Banks' effort and brilliance, he never made the postseason once in his career. He almost did in 1969, before the Cubs infamously blew a big division lead over the Mets by losing 17 of their last 25 games.

In 1982, Banks had his No. 14 jersey retired, the first Cubs player to receive such an honor. In 2008, the Cubs unveiled a statue outside Wrigley Field that honored him.

Bogen did not disclose how Banks died or offer any further comment. A news conference was planned for Sunday at noon in Chicago, he said.