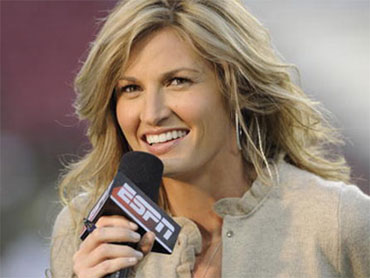 But by the time she started to tell a federal judge about the devastation and humiliation that Illinois insurance executive Michael David Barrett caused her, the veteran sideline reporter was determined and composed.

She called him a sexual predator, occasionally looking over to steal a glance at the suit-clad man who she said has shaken her confidence and hurt her career.

Her remarks were made before Barrett pleaded guilty to one felony count of interstate stalking. Before he could admit his crime, both Barrett and Andrews listened as U.S. District Judge Manuel Real read details of the crime in painstaking detail.

For 10 minutes, Barrett stood, hearing how he pursued Andrews, taped her, posted the videos online and then tried to sell them.

Andrews at times appeared to clench her jaw. She occasionally looked down, shook her head and dabbed tears from her eyes after the 48-year-old admitted the allegations.

She vowed to return on Feb. 22 when Barrett is sentenced and speak against a proposed sentence that would send him to federal prison for 27 months. Real could sentence Barrett to up to five years in prison, fine him $250,000 and order him to pay restitution to Andrews.

The proposed sentence is a "Mixed bag" for Andrews, CBS News legal analyst Lisa Bloom said on "The Early Show" Wednesday. "It's very interesting to me," Bloom told substitute co-anchor Debbye Turner Bell, "that the prosecutor and the defendant reached this plea deal over Erin Andrews' objection. Ordinarily, the prosecutor will confer with the victim, although the prosecutor doesn't represent the victim, the prosecutor represents the state. In a high profile case, to reach a plea deal over the objections of the victim is surprising. The maximum here was five years. That's what Erin Andrews wanted. That's what she's asking the judge to impose."

Why would prosecutors go that route? "Ninety-five percent of cases end in plea bargains and prosecutors do need to have the certainty of conviction," Bloom replied. "He's going to serve 27 months behind bars. That is a substantial sentence. I understand where the prosecutor is coming from. But the judge ultimately has discretion in this case ... and Erin Andrews making that very impassioned statement in court (Tuesday) may move the judge to impose a stiffer sentence, notwithstanding the plea bargain."

Bloom pointed out that video voyeurism is becoming more common. "We're seeing more and more of it," she says, "and not just in high-profile cases like the Erin Andrews case, but ordinary people. I've seen cases of high school girls being the subject of video voyeurism, in locker rooms, waitresses, women in restrooms -- it's happening more and more frequently. And prosecutors are going after people. State laws, by the way, are pretty light in this area -- generally a one to two-year sentence. Federal law, here, a five-year sentence. So, many people are calling for stiffer sentences as more and more women are becoming victims."

Nothing can fix what Barrett did, Andrews said after the hearing. The videos remain online, and she said no amount of effort will scrub them from the Internet.

Other constant reminders remain, including cruel taunts from sports fans while she works college football games. Sometimes, out of the corner of her eye, Andrews said she thinks she sees Barrett.

"I live in hotels because of my job, and every time I check in, I look around, constantly thinking he is there," she said.

Her fear, pain and humiliation make her want to change hotel policies and help other women who have fallen victim to video voyeurism.

She said she was appalled to learn that hotels gave out information about where she was staying, adding that she still calls hotels to see if they'll acknowledge she's a guest. They often do, she said.

"I have a responsibility to other women," Andrews said. "If I back down or shy away, what kind of message does that send to other women and other guys who may be doing this?"

Barrett, of Westmont, Ill., did not offer any reason for his actions Tuesday. Prosecutors say they do not know why he targeted Andrews.

His attorney released a statement after the hearing apologizing to Andrews and saying he is looking forward to any opportunity to "make positive changes" in his life.

Both Andrews' attorney, Marshall Grossman and her father, Steve, hinted that Barrett may face more penalties.

Federal prosecutors in Los Angeles have agreed not to pursue further charges. However, Barrett could face criminal action in other states stemming from other videos he allegedly shot of unsuspecting nude women through peepholes - Grossman said there could be as many as a dozen other women affected, but he did not provide details.

Andrews said she didn't consider leaving her job at ESPN.

"I do what I love," she said after the hearing. "It was time for college football to begin."

She said she has drawn strength from her co-workers and family, along with her resolve to help others.

"I didn't do anything wrong," she said. "If I can make a difference for more women, that's what I want to do."