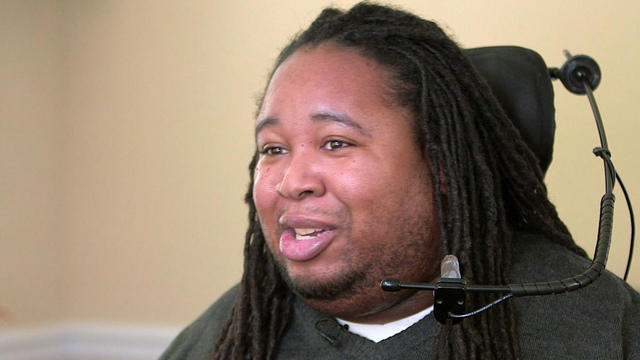 Every football player, from Pop Warner to the pros, dreams of playing in the Super Bowl, and sending players to the game is a point of pride for colleges as well. But Rutgers, the state university of New Jersey, has a unique distinction at Sunday’s game, with five former players on the Patriots and Falcons combined. That’s more than any school in the country.

Eric LeGrand played with them on the 2009 Rutgers football team. But it was the following season that put his life on a much different path than his fellow Rutgers stars, reports CBS News’ Dana Jacobson.

“Five Rutgers players in the Super Bowl? How does that happen?” Jacobson asked LeGrand.

“It happens -- I don’t know, actually. I’m not... even going to act like I do know,” LeGrand said. “It’s actually awesome… I know all five of those guys, I’ve played with each of them for two years. And knowing that they’re in the Super Bowl now, at the highest level in football where we all dream to get to, it’s pretty incredible to think about.”

LeGrand had that dream when he started playing football at age 10 in Avenel, New Jersey. He was a standout as early as Pop Warner, when he would play against one of those now-Super Bowl-bound guys, Mohamed Sanu.

“Freak athlete,” LeGrand said about Sanu, laughing. “He’s an absolute freak, the way that he goes out there and… plays the game. And with Pop Warner, you know, he was the tallest guy out there, just like me. And then we get to high school, and it’s like me versus him. I’m the middle linebacker, he’s the quarterback. Then he’s playing safety, a linebacker, and I’m the running back.”

The two high school all-stars teamed up at Rutgers University, just 20 minutes from home. It was while playing for the Scarlet Knights that Eric LeGrand’s Super Bowl dream came to an end.

“2010 against Army, you take a hit on the field, and you don’t get up. What do you remember from that moment?” Jacobson asked.

“I was just shaking my head, trying to get up. And all of a sudden the trainers come running over to me and they’re like, ‘Is it your head or your neck?’ And I’m like, ‘I can’t breathe,’” LeGrand recalled. “That’s all I can get out. And they’re like, ‘Can you feel this? Can you feel that?’ I’m just like, ‘I can’t breathe.’ That’s all I could pretty much say at the time.”

LeGrand had broken two vertebrae making a tackle on a kickoff, which left him paralyzed from the neck down.

“And then my coach Schiano comes out and tells me to pray. I’m thinking, ‘This is it, my life is over.’ And doctors told me I would never breathe again, never walk again. I’d be on a feeding tube for the rest of my life,” LeGrand said.

But doctors underestimated Eric LeGrand. With his mom, Karen, by his side and unbreakable spirit, he’s defying the odds.

“How are you doing right now?” Jacobson asked.

“I’m doing great. I’m healthy, I’m still in therapy two times a week... trying to keep my bones strong,” LeGrand said. “I’m only 26 years old and I still feel like I have a whole life to live and experience a whole bunch of things. So, I don’t let this wheelchair hold me back.*

Take one look around the walls of his room and you can see pieces of that life.

“That’s my Tampa jersey from when I signed with them,” LeGrand said. “They also sent me a helmet.”

You also see pieces of inspiration, including a picture with President Obama and his Sports Illustrated cover.

“That was an amazing moment, leading my team out the tunnel that year,” LeGrand recalled looking at the cover photo.

And while LeGrand says graduating from Rutgers is his greatest achievement, he’s certain the game of football is what prepared him for life -- teaching him to fight and to “believe.”

“Where does ‘Believe’ come from for you?” Jacobson asked.

“It comes from my high school locker room,” LeGrand said. “A sign above the door that said: ‘Believe.’ I always say you’ve got to believe in yourself. If you believe in the man above, anything is truly possible in this world.”

“Do you still believe that you will walk?” Jacobson asked.

“I do. You know, I got hurt at 20 years old, and now I’m 26. And just all the technology that’s came about in this time period -- Twitter, Instagram -- where I remember when I got hurt, I had a Blackberry Curve. Right now I’m iPhone 7,” LeGrand said, laughing. “It’s crazy to see how technology has advanced in just six and a half years. I’m like, ‘Where will we be in 15 years from now,’ you know? So that’s why I truly believe that we will find a cure for this one day in my lifetime.”

LeGrand is helping others to believe. His online series, “Mission Possible,” showcases the possibilities for people with disabilities. And his foundation, Team LeGrand, continues to raise money for the Christopher & Dana Reeve Foundation, which advances care and a cure for spinal cord injuries. Since 2013, it has raised $750,000. The goal for 2017 is to get one million.

“So, maybe it wasn’t... God’s plan for me to go score a winning touchdown in the Super Bowl. But hey, if I’m helping one person out to be better, that’s what it’s all about,” LeGrand said.

This week, Team LeGrand wrapped up his “Believe” T-shirt campaign. Among the athletes and celebrities posting photos in the shirts was his former Rutgers teammates playing in Sunday’s Super Bowl, including Falcons receiver Mohamed Sanu. Jacobson caught up with him this week in Houston.

“I mean, we love that guy.  He’s just one of the coolest, funniest, warm-hearted guys you’ll ever be around,” Sanu said. “He’s near and dear to my heart and that’s one of my really good friends. I would do anything for that guy.”

“It feels like once teammates, always teammates,” Jacobson said.

“It really (is) and that’s what our big thing was when we were at Rutgers -- it was family,” LeGrand said. “Forget about me, I love you. And I sacrifice for you, you know? We’ve been through the battles together. We’ve been in the locker rooms -- those are the memories that I miss the most: playing the game of football, being in the locker room after a win or after a hard practice, or when somebody messes up, and then we get to joke around with them a little bit. That’s the stuff that... I’ll always remember about the game of football. And I got to spend it with those guys.”

“Is there a part of you that feels like they’re playing for you, or you’re with them in any sense?“ Jacobson asked.

“Oh yeah, I’ve heard it from all of them before, you know? Sanu wears my ‘Believe’ band every game,” LeGrand said. “So just knowing those guys go out there and, you know, I’m on their mind is pretty cool to think about also.”

“Are you jealous at all?” Jacobson asked.

“Only thing I’m jealous about is not getting a ring,” LeGrand said, laughing. “That’s the coolest part. I love watching them play, you know? Doing their thing, that’s all cool. I’d never get jealous over that. But the ring, I would love to have one of those.”