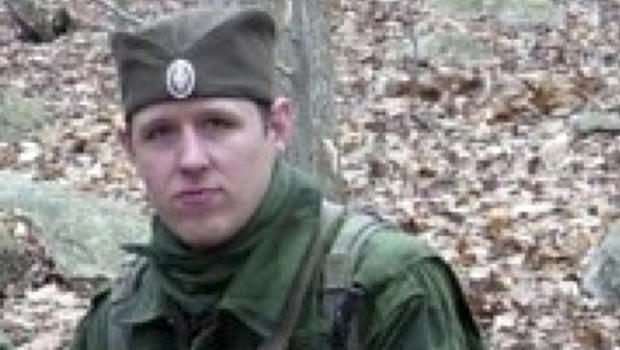 Pennsylvania State Police say they have seized supplies of food belonging to the survivalist charged with ambushing a rural police barracks. They say he will likely have to start breaking into cabins or searching through trash bins to sustain himself.

Lt. Col. George Bivens says police found a campsite recently used by 31-year-old Eric Frein. He says police found tuna fish, instant noodles and other food as well as 90 rounds from a rifle of the same type used in the deadly ambush.

Bivens says authorities are pushing Frein hard. He believes the suspect will have to resort to looking for food in vacant cabins and trash bins at restaurants and grocery stores.

The search for Frein entered its 21st day Friday. He is charged with opening fire at the Blooming Grove barracks during a shift change on the night of Sept. 12, killing Cpl. Bryon Dickson and seriously injuring Trooper Alex Douglass.

The ambush attack landed Frein on the FBI's most wanted list, and police have been authorized to use deadly force.

Bivens said earlier that he was confident that the manhunt has "significantly degraded" Frein's abilities. "I'm certain he's not sleeping well at night," Bivens said.

Hunting and trapping has been banned in seven northeastern Pennsylvania townships after police found explosive devices allegedly left by Frein.

Meanwhile, DNA testing was inconclusive on soiled diapers thought to have been left by Frein, the FBI said Friday.

The diapers had been exposed to the elements, so "you can't say one way or the other" whether Frein wore them, said Edward Hanko, special agent in charge of the Philadelphia FBI office.

State police announced last week they had discovered diapers in the northeastern Pennsylvania woods where Frein is believed to be hiding, and that he might have worn them so he could remain stationary for long periods of time.

Hanko said the diapers might have belonged to Frein, but the testing didn't confirm it or rule it out.

The manhunt is concentrated on a heavily forested area around the northeastern Pennsylvania home where Frein lived with his parents. Authorities believe they have spotted Frein from a distance, but the rough terrain made it impossible to get to him.

Frein has been described as an anti-law enforcement survivalist and expert marksman at home in the woods. He's considered armed and dangerous.

Even as the manhunt wrapped up its third full week, police said they remain confident Frein will be caught.

"It's just a matter of time for him," said Trooper Ryan Lawrence, who spent five days in the search zone. "The commissioner down to every road trooper has the same resolve."

Lawrence, who worked a 12-hour overnight shift on road and perimeter patrol, said the possibility that Frein was lurking somewhere nearby was never far from his mind.

"You definitely have to stay within a tactical mindset, just so you're not opening yourself up for a possible attack, at least limiting the possibility of making yourself a target," Lawrence said Friday.

The trooper would keep himself out of the glare cast by his car's headlights, for instance, giving him the ability to observe but not easily be observed.

Lawrence lives in Lancaster, about 100 miles from the search area. Troopers throughout Pennsylvania are signing up to search for Frein, he said.

"The driving force is obviously for the family of Cpl. Bryon Dickson. It's a commonly spoken thing while there, you are doing it for him and his family," Lawrence said. "There's a wife and two sons who aren't able to have their state trooper come home, and that's a driving force for a lot of our guys up there."

Pennsylvania state police have been joined by law enforcement officials from New York and New Jersey state police, the FBI, the U.S. Marshals Service and other federal agencies. The FBI alone has between 140 and nearly 200 of its staff in the field each day, Hanko said, including agents, analysts, technicians, three full SWAT teams and members of a hostage rescue team.

"He'll be located," Hanko said. "All our intel, and all of our analysis, and the sightings, and the items we've recovered that have been recently used tell us he's there."