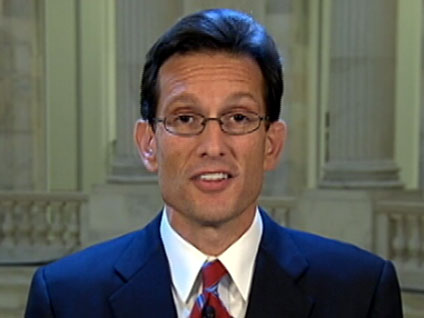 On CBS' "The Early Show" this morning, the newly-minted House Majority Leader Eric Cantor reiterated the GOP's priority to repeal health care reform as one of its first congressional acts, arguing that the bill is a "job killer" and that it is costing the American people "over $1 trillion."

Cantor also disputed the claim, put forth by the nonpartisan Congressional Budget Office, that the health care reform bill passed by Congress last year will actually reduce the deficit by $143 billion, calling the figure "budget gimmickry. "

"I think what we do know is the health care bill costs over $1 trillion," Cantor told Hill. "And we know it was full of budget gimmickry. And it spends money we don't have in this country."

In a letter released to House Speaker John Boehner this morning, however, the CBO argues that H.R. 2 -- the bill Republicans are proposing that would repeal health care reform -- would actually raise budget deficits by approximately $230 billion over the next ten years.

"Relative to current law, enacting H.R. 2 would, CBO estimates, increase federal budget deficits in the decade following 2019; similarly, the legislation would increase budget deficits in the decade following 2021 and in subsequent years," the letter reads."Consequently, over the 2012-2021 period, the effect of H.R. 2 on federal deficits as a result of changes in direct spending and revenues is likely to be an increase in the vicinity of $230 billion, plus or minus the effects of technical and economic changes to CBO's and JCT's projections for that period."

Nevertheless, Cantor renewed the GOP pledge to put forth the health care repeal bill next Wednesday, and brushed off concerns as to the merit of pursuing such an effort, which is unlikely to pass through the democratically-controlled Senate.

"If the Senate wants to continue to be the impediment for results, then they'll have to answer to the people of this country," Cantor said on CNBC's "Squawk Box" this morning.

Emphasizing the much-touted Republican goal to reduce federal spending and reign in the national budget, Cantor argued that the health care bill "stands in the way of small business job growth," and pledged "to find out what's going on in this bureaucracy in Washington and try to get them to stop passing the job killing regulations so we can get the economy back on track."

"We're going to be about a cut-and-go Congress," Cantor said.

But Republicans have come under fire in recent days for backtracking on a highly-publicized promise in the Republican "Pledge to America"to reduce discretionary non-defense spending in America by $100 billion in the federal budget this year - a reversal Cantor attributed to Congress's failure to pass a budget in the final days of 2010.

"The $100 billion was based on the fiscal year," Cantor said on ABC's Good Morning America. "And what happened, as you know, is when the Democrats ended the session last time, they didn't pass a budget. So we're in a situation where we have no budget right now, and we're gonna work hard to bring spending back to '08 levels."

Cantor argued that the original GOP goal had been "to reduce a discretionary non-defense spending down to '08 levels," and declined to name a new target figure when pressed by ABC's George Stephanopoulos.

Cantor also said that he hoped to work with Democrats on a plan to improve the economy. "When I spoke to the president yesterday, I told him we are very interested in what he has to say in the next couple weeks, especially when he comes up here to deliver the State of the Union address," Cantor said. "And I spoke to him specifically about the kinds of spending cuts that I hope he proposes in that address."