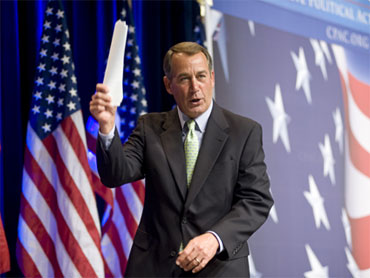 House Republicans, led by John Boehner, plan to unveil their "Pledge to America" tomorrow morning at a hardware store in Sterling, Virginia. An advanced copy obtained by CBS Newsreveals few surprises, but gives voters a basic idea of what Republicans will do if they take over the House next year.

It is also a clear pledge to the Tea Party with its focus on Constitutional principles and government spending. "With this document, we pledge to dedicate ourselves to the task of reconnecting our highest aspirations to the permanent truths of our founding by keeping faith with the values our nation was founded on, the principles we stand for, and the priorities of our people" the members say in the opening. "This is our Pledge to America."

The GOP plan is to stop the Bush tax cuts from expiring for all Americans, not just the middle class as many Democrats would like. Republicans would allow small businesses to take a tax deduction equal to 20 percent of their income. And they would repeal and replace health care with "common-sense solutions focused on lowering costs and protecting American jobs."

The Pledge also promises to reform the way Congress works by requiring each bill to have Constitutional citations and by giving members at least three days to read legislation before it comes to the floor for a vote.

On defense, they promise to fully fund the troops, missile defense and to enforce sanctions in Iran.

House Democrats were already busy Wednesday afternoon working up a fact sheet to pan the Republican pledge. In a draft version of the fact sheet, Democrats question the GOP's small business credibility given that Republicans are expected to return from the event to DC tomorrow to vote against a small business lending fund with tax breaks.

"Ironically, the party that's voted against small business tax cuts enacted into law by this Congress is actually holding their press event at a small business just outside Washington--and then racing back presumably to vote against the Small Business Jobs Act--crucial to get small businesses hiring and $300 billion in private sector credit flowing," said Nadeam Elshami, a spokesperson for House Speaker Nancy Pelosi.

The Democrats' draft also says that the GOP plan will "blow a $700 billion hole in the deficit to give tax cuts to millionaires and billionaires" and "take away patients' rights" by repealing the health care bill.

The Republican plan would take spending back to 2008 pre-TARP and stimulus spending levels and would put in place strict budget caps. But it's unclear how much money would actually be saved given the funding promises in the GOP pledge on extending and adding tax cuts, repealing but replacing health care, and increasing defense spending.

Jill Jackson is a CBS News senior political producer. You can read more of her posts in Hotsheet here. You can also follow her on Twitter.