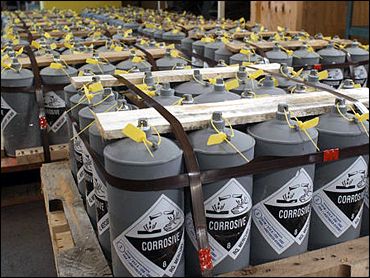 White House staff made subtle changes to the language of proposed rules on mercury pollution that largely downplayed the chemical's health risks, a newspaper reports.

Scientists from the academy told the newspaper that none of the language was false — some of it made the wording clearer, and the rest pertained to scientific points that are debatable.

But the White House usually came down on the side of wording that downplayed the risks of mercury, which the academy concluded can affect children's and festuses' brains, the newspaper said.

According to The Times, one section first read: "Recent published studies have shown an association between methylmercury exposure and an increased risk of heart attacks and coronary disease in adult men."

It ended up reading: "it has been hypothesized that there is an association between methylmercury exposure and an increased risk of coronary disease; however this warrants further study as the new studies currently available present conflicting results."

A White House spokeswoman tells the paper the changes were part of the normal process of drafting rules. One scientist said the original National Academy report overstated some of the evidence against mercury.

The proposed rules on mercury mirror the wishes of the energy industry, and according to The Times, some sections of the rules are nearly identical to what was proposed by lobbying firms with ties to current EPA officials.

Attorneys general from 10 states and 45 senators want the rules thrown out, and the EPA administrator, Michael Leavitt, is reviewing them.

Under the proposed rules, the Bush administration is proposing to give power plants up to 15 years to install technology to reduce mercury pollution.

The EPA proposal would ease limits envisioned by the Clinton administration, while requiring immediate action in some cases.

In 2001, EPA estimated that mercury could be cut by as much as 90 percent, to 5.5 tons, by 2008 if the best available technology were used as the Clinton EPA had hoped, according to EPA documents obtained by advocacy group National Environmental Trust.

But the White House and EPA want to let utilities meet mercury pollution limits the first six years using the benefits of controls installed for other pollutants that cause smog and acid rain.

The Clinton administration listed mercury as a "hazardous air pollutant." The Bush administration would undo that by placing mercury into a less strict category of the Clean Air Act, which will allow companies to buy and sell pollution rights with other plants under a "cap-and-trade" system.

This approach, EPA says, would eliminate about 14 tons a year of mercury emissions from the currently unregulated 48 tons a year generated by coal-fired power plants. Such plants account for about 40 percent of the nation's mercury pollution.

After that, the pollution-trading proposal would cut an additional 19 tons a year of mercury emissions, EPA says. The result would be a 70 percent reduction — from 48 tons to 15 tons — by 2018, the agency says.

Cap-and-trade programs set a national limit on emissions and then allow companies to choose whether to reduce emissions or buy credits from plants that do. This rewards firms that innovate first and imposes costs on those that do not.

Supporters say the system allows the market to pick the most cost-effective way to reduce pollution.

Proponents frequently point to the acid rain trading program begun in 1990 as the model for using market forces to reward companies that surpass their pollution reduction targets. But it would mean the toughest mercury requirements would not take force until 2018.

Last fall, scientists told the Food and Drug Administration that it should issue stronger warnings to pregnant women and young children about mercury levels in fish, particularly tuna. White, or albacore, tuna has nearly three times as much mercury as cheaper "light" tuna.

Mercury pollution can taint fish once it enters water and turns into a more dangerous form, methyl mercury.

Twelve states and several Northeast cities sued the EPA this fall to block the new Clean Air rules, which they argue will weaken protections for the environment and public health.