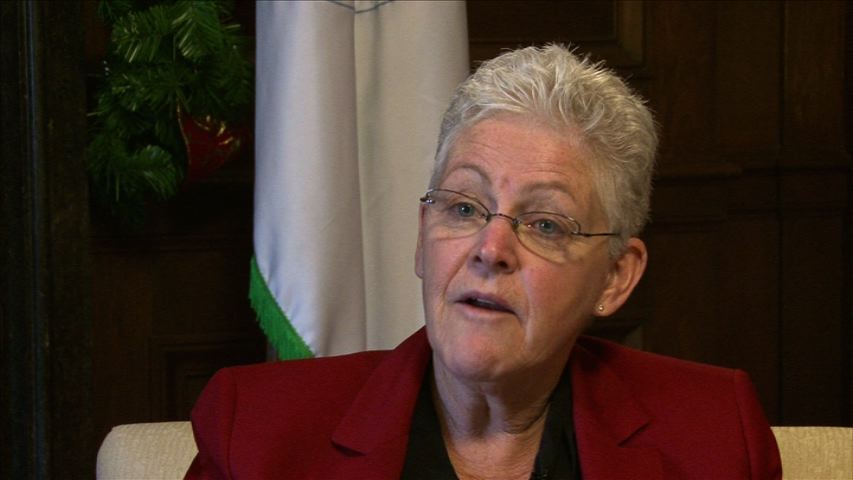 In an exclusive interview with CBS News, McCarthy, who became EPA administrator in 2013, defended her agency's plans to reduce carbon emissions from coal-fired power plants, strengthen ozone standards and regulate leaks of methane.

"It's my job to explain to people why what we are doing is the job that Congress gave us and why it's important from a public health perspective," she said. "We have proven for 40 years that we can make this case."

The EPA is on the front lines of a multi-pronged effort by President Obama to reduce greenhouse gas emissions by 17 percent from 2005 levels by 2020. As part that of that effort, the agency is proposing to reduce carbon emissions from coal-fired power plants 30 percent by 2030. It is also expected to announce plans to regulate mercury in the coming weeks.

Add to that an air quality proposal, which seeks to lower ozone standards to within a range of 65 to 70 parts per billion, and a rule combating mercury that is the focus of a bitter court fight, it's no wonder the agency has become a favorite target of Republican leaders and traditional business groups.

They have argued these regulations will decimate the economy. The ozone rule alone, they say, would cost the economy $3.4 trillion in GDP from 2017 to 2040. Sen. Jim Inhofe, R-Oklahoma, a fierce climate change denier, has written the agency to say it lacks the authority to regulate carbon emissions. And the Republicans have made it clear that when they take over in January they will make it a top priority to reign in the agency's power.

It only got worse for McCarthy this week, after a congressional deal to fund the government included budget cuts to the EPA that would leave the agency with the smallest staff in a quarter century, according to The Associated Press.

McCarthy, who was the environmental point person for five Republican governors before joining the EPA in 2009, appeared unmoved by the controversy and said the fears of job loss and economic stagnation are always trotted out - and proven unfounded - whenever the agency proposes anything to improve the environment.

"There may be a lot of continued rhetoric that (this) is a doomsday scenario. But we will just remind people that this a different decade, the same stuff," she said. "They have been saying this every decade that EPA has been around and we have not seen those doomsday scenarios come true."

A case in point, she said, was the rule which limits emissions of mercury and other toxic pollutants from coal-fired power plants.

The next fight will be the carbon emissions plan. As the EPA sifts through 2.2 million public comments that will help shape the plan, it is hearing from politicians including some Democrats who want it delayed over fears that it could put the reliability of electrical power at risk.

McCarthy is hearing none of that.

"While you hear this swirling, people are still at the table, they are rolling up their sleeves," she said. "They are going to get this work done because they know we are very serious about getting a rule finalized as quickly as we can so we can take action on climate the way the president has promised and the way our laws require us to."

"I am going to do my best on behalf of the hard-working people of the EPA, who are sticking with their jobs and doing it well...We are going to do our job there and that is what we will continue to do," she stated.

McCarthy was careful to add that the agency was doing its utmost to consider the views of all sides, including concerns about the rule's economic impact. She admitted that the work they do can be perceived as polarizing, but insisted that "the environmental agency has not been a partisan agency," pointing out that the EPA came into being under President Nixon and that President George H.W. Bush signed a significant amendment to the Clean Air Act.

"This is the epitome of a collaborative process with the states and with the business community. It is unprecedented outreach. It is unprecedented flexibility that we have provided to each state," she said. "It is clear recognition that coal will be a continued part of our future. This is not a war on coal. It's an effort to address carbon pollution the same way we address mercury, the same way we address all of our ambient air quality standards."

McCarthy said she believed the "vast majority " of the public and many business leaders are behind the agency's plans either because they understand the public health benefits or have witnessed the economic benefits of a green economy - whether that be the explosive growth of renewables or popularity of fuel-efficient cars.

"There is no way in which I think a case can be made that we should sit and do nothing on carbon pollution and climate change and that is beneficial to the economy," she said. "The worst thing you can do for the economy here and for our competitive advantage everywhere is to not take action on climate. That is where there is huge economic risk that we simply can't afford to absorb any longer."

In the end, McCarthy said she believed the agency will be able to strike a balance between protecting the environment and growing the economy and won't do "anything to bring forward those doomsday scenarios."

"While I don't expect a pat on the back from everybody, I do want to be given the opportunity to do my job well," she said. "I think we will show people that EPA is extraordinary in terms of our ability to grasp the science, grasp the technical issues, to understand the cost and benefits associated with our rules and to be able to deliver this rule in a way that they want - which is not hurting them economically but actually spurring that, really addressing the carbon pollution that challenges us."