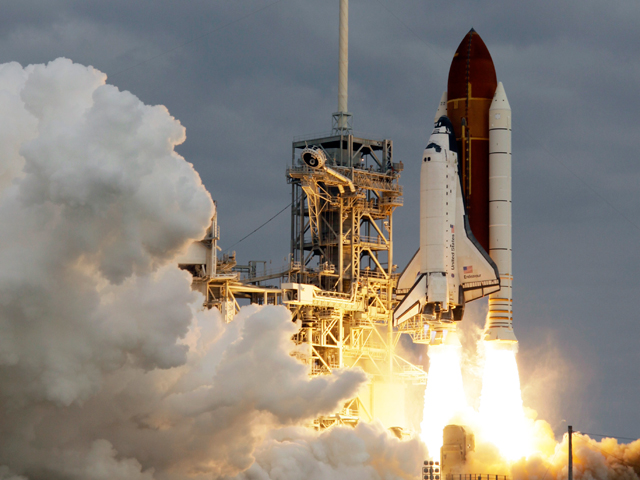 CAPE CANAVERAL, Fla. - Endeavour blasted off on NASA's next-to-last shuttle flight, thundering through clouds into orbit Monday morning as the mission commander's wounded wife, Gabrielle Giffords, watched along with an exhilarated crowd estimated in the hundreds of thousands.

"Good stuff, good stuff," Giffords was quoted as saying by her chief of staff as Endeavour took flight for the final time. Husband Mark Kelly, the shuttle's skipper, had red tulips presented to her afterward. She wore his wedding ring on a silver chain while he carried hers with him.

Accelerating through 100 mph -- straight up -- in just eight seconds, Endeavour climbed away and quickly disappeared from view as it knifed through low-level clouds, wheeling about to line up on a northeasterly trajectory paralleling the East Coast, Harwood reports.

NASA is winding down its 30-year-old shuttle program before embarking on something new. The liftoff generated the kind of excitement seldom seen on Florida's Space Coast on such a grand scale — despite a delay of more than two weeks from the original launch date because of an electrical problem.

Monday's countdown was close to perfect, and the shuttle quickly disappeared into thin, low clouds.

"That was four seconds of cool," said Manny Kariotakis, who was visiting from Montreal. The 50-year-old day care owner got goosebumps watching the liftoff with thousands along Highway 1 in Titusville.

Launch manager Mike Moses apologized for the fleeting glimpse. "The view wasn't the best," he said. (At left, a video posted to Twitter shows the Endeavour shuttle launch as seen from a plane window.)Woman on plane films Endeavour

Just before launching, Kelly thanked all those who put hands "on this incredible ship."

"It is in the DNA of our great country to reach for the stars and explore. We must not stop," he said.

Remarkably, Giffords made a return visit to see Kelly off. She is still undergoing rehabilitation in a Houston hospital to recover from a gunshot wound to the head in an assassination attempt little more than four months ago. She has weakness on her right side, and difficulty speaking.

The Arizona congresswoman, sitting in a wheelchair, watched the launch in private with her mother and the other astronauts' wives and children atop the Launch Control Center. There were hugs all around after the shuttle rocketed away, said the congresswoman's chief of staff, Carusone.

"It was a real sense of relief from all of us that this went off safely," Carusone said.

Kelly's identical twin Scott, who's also an astronaut, presented red tulips to Giffords, and a single red rose to each of Mark's two teenage daughters from a previous marriage.

Giffords has kept out of the public eye since the Jan. 8 shooting that wounded her and killed six in Tucson, Ariz. She and Kelly said their goodbyes on Sunday.

With Kelly at the helm, Endeavour and its experienced crew of five Americans and an Italian are headed for the International Space Station. They will arrive at the orbiting outpost Wednesday, delivering a $2 billion magnetic instrument that will seek out antimatter and dark energy in the universe.

On Tuesday, the astronauts will survey their ship for any launch damage to Endeavour's thermal shield. Only a couple small bits of insulating foam came off the fuel tank during the crucial phase of liftoff, officials said.

Up to 45,000 guests jammed into NASA's launch site, and thousands packed area roads and towns to see Endeavour soar one last time. Only one shuttle flight remains.

Advance estimates had put Monday's crowd at 500,000, more than the number that saw Discovery's final hurrah in February. Across the Indian River in Titusville, though, the number of spectators appeared to be down compared with Endeavour's previous launch attempt on a Friday afternoon.

"I don't know if it was the early morning or what," Lau said.

Electrical trouble grounded the shuttle on April 29, disappointing the hordes of visitors, including President Obama and his family. Repairs over the past two weeks took care of the problem.

The 47-year-old Navy captain took a leave from training to be by his wife's side after she was wounded, and it seemed unlikely he would stay with the flight. But Giffords improved and was moved from the hospital in her hometown of Tucson to Houston where Kelly lives and does astronaut training. Her days were filled with rehab work, and he yearned to see the shuttle mission through. A month after the shooting, he announced he would fly.

He rejoined his crew in February, still managing to see his wife across town every morning and evening.

Giffords' visit to Kennedy Space Center — the third time she's seen her husband soar into space — ratcheted up the excitement level for what already was a big event, said launch officials.

This is the 25th and final flight of Endeavour, the baby of NASA's shuttle fleet. It was built to replace Challenger, destroyed during liftoff 25 years ago this past January, and made its maiden journey six years later to capture and repair a stranded satellite. That first flight ended 19 years ago Monday.

Endeavour carried the first Hubble Space Telescope repair team, which famously restored the observatory's vision in 1993, and the first American piece of the space station in 1998.

It will end its days at the California Science Center in Los Angeles.

As of Monday, Endeavour had logged more than 116 million miles, circled Earth some 4,500 times, spent 283 days in space and carried 170 people, including the last two people to fly a space shuttle for the first time. American Mike Fincke and Italian Roberto Vittori are making their first flight on a shuttle although they've been to the space station twice, ferried their by Russian Soyuz rockets.

Fincke will team up with Andrew Feustel and Gregory Chamitoff for four spacewalks during the 16-day mission. It will be the last spacewalks conducted by a shuttle crew.

NASA officials said it will be a demanding flight, including the unprecedented departure of a three-person Soyuz capsule while Endeavour is there. The shuttle and station crews will sleep at different times to accommodate the Soyuz undocking next Monday, just five days after the shuttle's arrival.

NASA's last shuttle flight, by Atlantis, is targeted for July. After that, Atlantis will remain at Kennedy, where it will go on display at the visitor complex. Discovery will head to the Smithsonian Institution's hangar outside Washington.

American astronauts, meanwhile, will continue to hitch rides to the space station on Russian Soyuz rockets. Private companies hope to pick up the slack, but that's still years away.

Once Atlantis flies, it will be three years — at best — before Americans are launched again from U.S. soil. Some NASA observers fear it could be a full decade.

The White House wants NASA focusing on eventual expeditions to asteroids and Mars, unfeasible as long as the shuttles are flying given budget constraints.

Ohioan Stan Oliver made a last-minute trip for the launch. The assisted-living residence manager got a ticket to Tampa and then drove Sunday night to Titusville, where he slept in his car.

"This is a once in a lifetime event," said Oliver, 41, who lives near Dayton. "It was worth it. The roar was intense. I'm glad I came."

Launch director Mike Leinbach said those who dedicated themselves to Endeavour over the years likely shed a few tears Monday. "But that's OK," he said, "because they know they did the best job they could, and Endeavour's safely on orbit."