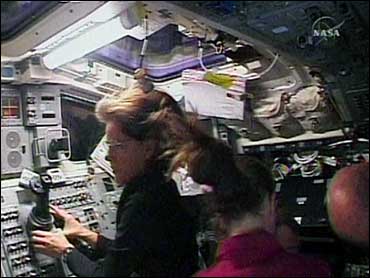 Teacher-astronaut Barbara Morgan spent her first full day in space helping her fellow crew members inspect the shuttle Endeavour for damage on Thursday as they zoomed toward the international space station.

The Endeavour astronauts are working through a busy first full day in space, completing setup of the ship's laptop computer network, checking out their spacesuits and carrying out an exhaustive inspection of the shuttle's nose cap and wing leading edge panels, reports CBS News space analyst Bill Harwood.

Morgan was fulfilling the space program's quest to send an educator into space, a dream that could have died in 1986 with the Challenger explosion that killed teacher Christa McAuliffe and six astronauts. The shuttle launched Wednesday evening.

The crew also spent part of the morning trying to fix a problem with a controller on an oxygen tank that helps power the shuttle's fuel cells. NASA officials said the issue was nothing more than a minor inconvenience.

The scan for damage from fuel-tank insulating foam and other debris from launch, or micrometeorites in space, has been standard procedure ever since Columbia's catastrophic re-entry in 2003.

Bill Gerstenmaier, NASA's space operations chief, said early checks showed four or five small pieces of debris from the external fuel tank came off during launch. He said it happened too late to cause concern.

Early in the day, the shuttle was trailing the international space station by 1,242 miles, adds Harwood, and were closing the gap at about 160 miles per 90-minute orbit. Two rendezvous rocket firings are planned Thursday to fine-tune Endeavour's ongoing rendezvous; if all goes well, commander Scott Kelly will guide the shuttle to a linkup with the lab complex around 1:54 p.m. Friday.

During Wednesday's launch, once Endeavour was safely past the 73-second mark of the flight, the moment when Challenger exploded, Mission Control exclaimed that Morgan, McAuliffe's backup for Challenger, was "racing toward space on the wings of a legacy."

Immediately after the shuttle reached orbit, Mission Control announced: "For Barbara Morgan and her crewmates, class is in session."

Midway through the flight, Morgan will speak with students in Idaho, where she taught elementary classes before moving to Houston in 1998 to become the first teacher to train as a full-fledged astronaut. If the mission is extended from 11 days to 14 days as planned, thanks to a new station-to-shuttle power converter, she'll also have a chance to answer questions from students in Virginia and Massachusetts.

But Morgan's primary responsibility in orbit will involve helping to operate Endeavour's robotic arm and overseeing the transfer of cargo from the shuttle to the station.

The rest of the crew will be busy installing a huge, square-shaped beam to the exterior of the station and replacing a broken gyroscope. Three spacewalks are planned; a fourth is possible.

NASA is hoping a successful flight will draw attention from the rash of embarrassments it has faced this year. Most recently, a NASA-commissioned medical panel's report suggested astronauts were intoxicated on launch day on at least two occasions.

NASA Administrator Michael Griffin said the televised preparations for Wednesday's launch demonstrated how difficult it would be for an astronaut to drink before takeoff.

"I would defy anyone to find an opportunity they had to do any drinking from the time they woke up this morning," Griffin said. "They would have to really want to drink and hide it really well."

This is Endeavour's first flight since 2002. The shuttle underwent a massive overhaul and was outfitted with complete satellite navigation, improved main engine monitoring equipment and a new system for transferring power from the station to the shuttle. The extra power will allow the shuttle to remain docked at the space station longer than ever before.