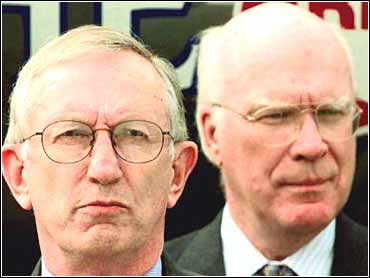 In his latest Against the Grain commentary, CBSNews.com's Dick Meyer looks at a dying breed of American politician: the Republican moderate.


Never in the history of Congress has a party lost control of either the House or the Senate because of a party defector. Until now.

That's a somewhat polite way of saying that losing James Jeffords is a blunder of historic proportions by the Republicans.

Party switches are actually quite rare. Only 15 members of Congress in the past 20 years have changed parties while holding office. Of those, 14 were Democrats who morphed into Republicans. So it's quite astonishing that the Republicans could lose control of the Senate by a defection of all things; ever more echoes of the ultra-weird election of 2000.

It's also ironic that this should happen to George W. Bush, who calculatedly campaigned as an "inclusive" or "big tent" Republican. The 2000 Republican National Convention in Philadelphia was a nauseating, nonstop festival of pseudo-inclusiveness and scripted, superficial diversity marketing. It all seems even cheesier now that someone like Jeffords – a gray Vermonter and lifelong Republican – announces he doesn't feel welcome in the alleged big tent.

Sen. Jeffords said he parted ways with his president and party on choice, judicial nominations, education, defense policy, energy and the environment. There's not much left to bring someone under the big top.

The GOP's loss of Jeffords is, of course, the loss of a member of an endangered species: the Republican moderate. When Lowell Weicker, the former Connecticut governor and senator, quit the party, he said that moderates were no longer a wing of the Republican Party, just a feather. That was in 1990, when people still used the phrase "liberal Republican." Moderate Republicans, at least in Congress, are now a feather's hair – and they're not tickled.

Depending on how you count and sort, there are now three or four Republican senators who wouldn't protest at being called moderate: Olympia Snowe and Susan Collins of Maine, freshman Lincoln Chafee of Rhode Island and, maybe, Arlen Specter of Pennsylvania. A few of their colleagues don't mind being seen with them in the cloakroom, perhaps Richard Lugar, Pete Domenici and Ben Nighthorse Campbell, a former Democrat.

There is also a maverick feather of the party named John McCain. But most of his press conferences these days are co-hosted by guys named Lieberman, Feingold or Edwards – Democrats who may run for president in 2004, not Republicans building voting blocs. Within the Senate Republican caucus, he's a lone wolf, not a pack leader.

So a unique strain of modern American politician is just about kaput. In the 1960s, New York's Jacob Javits led a band of moderates and even liberals that variously included Clifford Case of New Jersey, Mark Hatfield of Oregon, Margaret Chase Smith of Maine and Edward Brook of Massachusetts, the first African-American in the Senate. The Democrats were ferociously divided between conservative Southerners and liberals, so Republican moderates were extremely influential. And they had plenty of power outside of Congress. Nelson Rockefeller was New York's governor and almost captured the Republican presidential nomination in 1968.

The moderate wing expanded in the 1970s and may have peaked in the 1980s, while Ronald Reagan was president, oddly enough. Mark Hatfield and Bob Packwood of Oregon, Charles Mathias of Maryland and Weicker constituted the liberal fringe. Not far behind were David Durenberger and Rudy Boschwitz of Minnesota, Arlen Specter and John Heinz of Pensylvania, and all the New Englanders – Bill Cohen, Warren Rudman, Robert Stafford, John Chafee. Finally, there was a group sometimes called "reasonable Republicans" that included Nancy Kassebaum, Richard Lugar and John Danforth. They often lent clout to the moderate wing.

The Democrats have also undergone a decline of ideological diversity. It's not obvious why purity police in both parties have triumphed, but they have. Undoubtedly, one culprit is the intrepid world of political marketing.

Politicians use the same pollsters, the same ad men, the same strategists, the same direct mail wizards and the same soft money herders. The process of bringing a political product - that is, a candidate - to market has become more centralized. Creating a well defined, homogenous political "brand" is important.

The result is that debate and dissent within the parties get muted. And politics becomes more boring. Exhibit A: George W. Bush vs. Al Gore, pre-Florida.