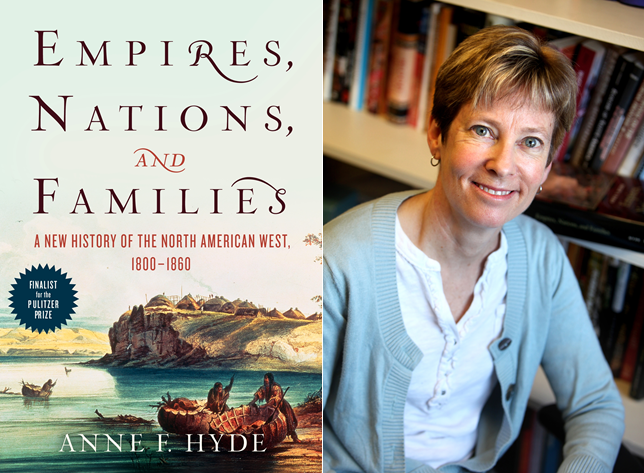 Jeff Glor talks to Anne Hyde about "Empires, Nations, and Families: A History of the North American West, 1800-1860"

Anne Hyde: I wanted to figure out a way to retell the story of the 19th century west that could be more complex than great Anglo explorers, hardy pioneers, and disappearing Indians. I knew this story was inaccurate, but it needed something else to replace it. What makes the story exciting is the sense of possibility because no single empire or nation controlled the West. No one knew who would win in the end, which really affected how people lived their lives and did business. Native nations had great power because they controlled economic resources. I started thinking about forts as microcosms of life in the American West in that period. As I tracked down some of these people, and traced their lives across the West in the early 19th century, I began to find family letters, business records, government documents and reports that showed me a web of interconnected families, friendships, and business relationships that made the region operate between 1800 and 1860. Once I understood how it worked, I really wanted people to read about the racially and ethnically complex cast of characters that ran the show in the West.

AH: Three things really surprised me. First, the significance and sheer number of mixed race families of all kinds throughout the period - because survival and success in the region required inter-ethnic connection and because the best way to build relationships is through family and kinship. Once you start noticing these families who link Native nations with Anglo-American, French, Spanish, and Mexican nations, they are everywhere. All of the leaders in the region, male and female, have intimate family connections across ethnic lines because it makes cultural and economic sense.

Second, the stability and longevity of this system of trade and business run by these complicated, interconnected families is amazing. Telling the story by looking at these networks of people also highlighted Native nations and their power even in a century of demographiccollapse.

Finally, I'm still shocked by how bloody the process of undoing this successful system would be and how personally I took all this. Because I'd organized it by families and made it a very intimate story, it was very hard for me to write about all the terrible things that happened to these families beginning in the 1850s. Warfare, epidemics, reservations, new racial regulations. I had to write an epilog that described what happened to my families in the late19th century to demonstrate that even though the story is hard, children and memories survive.

AH: Well, even though I spend a lot of time writing and worrying about writing, my primary day job is teaching college students. Looking at the past and thinking about how to make it vibrant and relevant and accurate is really a passion for me. I love the way history allows us to get some distance from an issue and to empathize with other humans at the same time. If I really had to pick another calling in life, maybe I'd be a veterinarian - so that I could get a sense of how animals view the world - but I think that would just be another way of getting perspective about the human condition.

AH: Well, I seem to be reading a lot biographies and murder mysteries. I just finished reading Robert Caro's fourth volume in his Lyndon Johnson biography, which was just riveting. I'm trying to figure out how he makes the details of passing legislation so exciting. I'm hoping that Dana Stabenow, Margaret Coel, and Louise Penny will all have new mysteries soon since I just inhale those. I'm getting ready to teach an Introduction to Race and Ethnic studies class, so I'm reading Anton Treuer, "The Assassination of Hole in the Day" and Margaret Atwood's "Year of the Flood."

AH: Now that I've discovered all of these mixed race families, I'm tracing them into the late 19th  century and watching how they deal with new racial ideologies. Big parts of the West - around the Great Lakes and the upper Missouri, in the Southwest, in the Pacific Northwest - have very mixed communities for a very long time. I've been looking at records in the National Archives and local historical societies to get a sense of what happens. What is the range of choices people have and how do they make sense of them? Do young men of mixed race backgrounds have a harder time in the West than young women? Does it matter if they are Native and Anglo, or Anglo and Mexican, or French and Native? The simple answer is that these people don't just disappear, but how they understand themselves and how the West metabolizes them is very interesting.

For more on "Empires, Nations, and Families" visit the Harper Collins website.