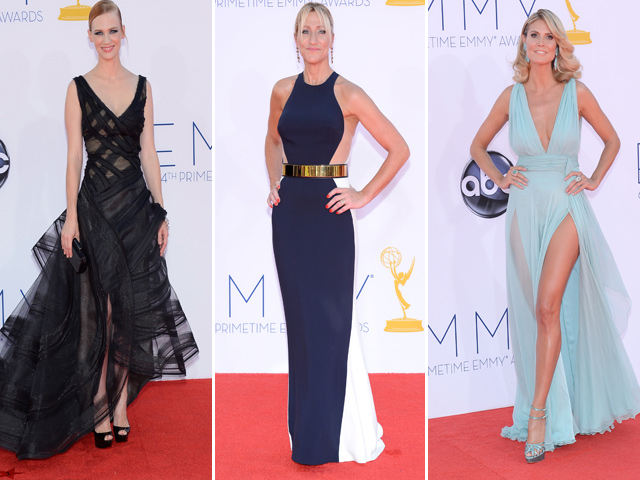 (CBS/AP) Stars took some high-fashion risks on the Emmy Award red carpet Sunday night at the Nokia Theatre in Los Angeles. There were high slits and a mix of bold colors, making up an dazzling array of gowns.

There was plenty of red on the carpet Sunday, including on Kat Dennings of "2 Broke Girls" in J. Mendel, "Once Upon a Time" star Ginnifer Goodwin in red flame over champagne by Monique Lhuillier and Tina Fey of "30 Rock" in dark red with gold bust details by Vivienne Westwood. Jena Malone wore burgundy J. Mendel.

The red carpet was filled with many shades of blue, too, as well as bold and jewel-toned colors. Metallics and gold accents were present as well. Heidi Klum donned an extremely high slit in her gown. Her dress was by French designer Alexandre Vaultier and she had a sexy '70s wave to her hair. Yellow also popped up at the Emmys with Julie Bowen, Claire Danes, Julianne Moore and Leslie Mann all sporting the hue.

"Top Chef" host Padma Lakshmi wore an orange strapless gown by Lhuillier that made her an early trending topic on Twitter, and actress Leslie Mann had on a bright orange skirt on her bare beaded halter gown by Naeem Khan.

Zooey Deschanel had a manicure with little TV sets on her thumbnails - perhaps the kind of thing "E!" had in mind for its mani-cam that had stars walking their fingers down a tiny red carpet.

Celebrities build their fashion reputation largely from the red carpet, Lhuillier said, and they'll affect trends for color, silhouette and embellishments. Lhuillier said Emmy gowns were already in the works earlier this month when she presented her most recent catwalk collection - one in which she declared "the ballgown is gone." Instead, she focused her full-length dresses in mermaid and other sleeker hemlines.

Louise Roe, a fashion commentator and Glamour magazine editor, who'll host of the second season of NBC's "Fashion Star," said her eyes will be on the lookout for anything eye-catching, especially if anyone taps into the harnesses, sheer panels and cutout bodices that designers are offering for 2013.

She thinks stars from "Gossip Girl" and "Revenge" could be among those to watch.

Not everyone watching TV will need a gown in the coming weeks or months, but when they do, they'll often turn to the brands they hear about at the Emmys, Oscars or Grammys, Lhuillier said.

"That's what a red carpet does for a company like mine."

There's always someone who takes the high-fashion risk on the Emmy red carpet. It was Gwyneth Paltrow and her belly-baring, metallic lace number last year. It wasn't a critical favorite, but now - in retrospect - it seemed like the spark for many of the current runway trends.