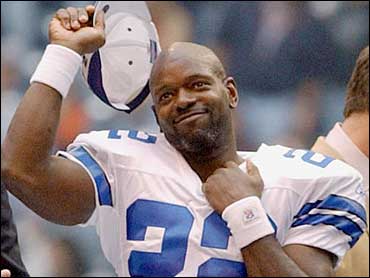 Emmitt Smith never considered leaving Texas Stadium without the NFL's career rushing record. He even dressed for the occasion.

Smith went through four No. 22 jerseys during his historic game Sunday. But under them all he kept on the same white T-shirt, one with his image on the Dallas Cowboys star logo, the phrase "All Time" and the number 16,727 - a yard more than the late Walter Payton had.

With an 11-yard run in the fourth quarter against the Seattle Seahawks that was classic Emmitt, he became No. 1.

Smith cut left, saw a hole and plunged through it. He got tripped up, but put his right hand down to keep his balance and surged forward. And past Payton.

"Trust me, I knew what I needed," Smith said. "Once I broke the line of scrimmage I knew that would have to be the one."

The 33-year-old Smith wanted to get the record at home, and he knew this was his last chance because the Cowboys play their next two games on the road. So he went out and had his best game of the season.

Smith ran for 109 yards on 24 carries, both season highs, and scored a touchdown, giving the Dallas fans something to remember even though their team lost 17-14. Many of them even stayed around for a postgame celebration.

"To do it in front of the home crowd makes history of this magnitude such a special thing," Smith said. "I've learned how special it is when I saw Cal Ripken go through what he went through, and I saw Mark McGwire and Sammy Sosa, and watched Barry Bonds do what he did, and saw the fan reaction."

After Smith came back on the field in full uniform, he took a victory lap around Texas Stadium - a la Ripken - and slapped hands with fans before making his way to a star-shaped stage in the middle of the field.

Smith gave an eloquent speech filled with thank-yous and memories, and then was presented a silver football from Cowboys owner Jerry Jones before the team unfurled a banner that reads: "All-Time Leading Rusher ... 22 ... Emmitt Smith."

With the song "Simply the Best" blaring, Smith looked at the banner and squeezed his eyes shut trying to gather himself. But the tears flowed as he embraced Jones.

Among the others there to share the moment were Payton's mother and brother, Pat Summerall, Marcus Allen, Daryl Johnston and Michael Irvin, who said: "We all want to thank Emmitt for allowing us to enjoy every yard."

Midway through his 13th season, Smith has 16,743 yards. Payton finished his 13-year career in 1987 with 16,726. Smith broke Payton's record for career carries earlier this season and topped his yardage record in his 193rd game; Payton played 190.

Payton, who played his entire career for the Chicago Bears and earned the nickname "Sweetness" for his beautiful playing style, died in November 1999 from cancer. He was 45.

Payton once said he wanted "to set the record so high that the next person who tries for it, it's going to bust their heart." Smith has displayed so much heart that Payton's widow, Connie, said he would've been happy to see No. 22 take the title.

"So, I didn't bust my heart, but I sure worked hard and tried to get here," Smith said. "I don't know how long it's going to last. I don't know if you are going to find anybody to do it with one team like Walter did it and like I did it."

The rushing record had been a goal for Smith since he scribbled it on a piece of paper before going to his first Cowboys training camp in 1990.

Now the running back whose denigrators have said he was too small and too slow has proved them wrong and reached his goal.

Smith got the record on his 20th carry Sunday, getting just enough yards to pass Payton and sustain the 1-yard loss he had on his first carry after play resumed.

After the play, Smith ran to midfield and was lifted by fullback Robert Thomas. He took the ball to the sideline and shared long hugs with former and current teammates. He and Johnston had an extended embrace.

"The reason I wanted to continue to play when I got hurt was to be on the field when he did this," said Johnston, who overcame a neck injury before retiring in 1999. "Being on the sidelines with him today was absolutely tremendous, the highlight of my career."

Smith had four more carries after the record run, all on the same drive. After the 1-yard loss, he exploded for 14 yards - his sixth carry of at least 10 yards - and had consecutive 1-yard runs, the second his 150th career rushing TD, extending his own NFL record and tying the game at 14.

Seattle then drove for Rian Lindell's 20-yard field goal with 25 seconds left, but it was still Smith's day.

"Today is a special day for me, my family and the Payton family," Smith said. "Because without Payton doing what he did in the National Football League and representing all he represented, he wouldn't have given a young man like myself a dream, something to shoot after and a person to look up to and try to emulate in every way possible."

Now everybody else will be shooting for Emmitt.