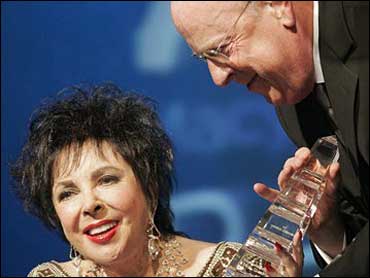 Elizabeth Taylor was hospitalized for an undisclosed reason but was expected to return home soon, representatives for the Oscar-winning actress said Thursday.

A statement released by Dick Guttman, her Los Angeles-based publicist, did not say where Taylor was staying, nor did it specify what was ailing the 76-year-old actress.

"Ms. Taylor is fine," the statement read. "Her hospital visit was precautionary. She will be returning home shortly. At present, she is surrounded by family, friends and fabulous jewels."

Guttman said he had no further details about Taylor's health or whereabouts. A person who answered a call placed to Taylor's home Thursday, who would not give her full name, said only that Taylor's condition was "nothing to worry about."

A number of health issues have dogged Taylor through the years, including congestive heart failure in 2004 that, compounded with spinal fractures and the effects of scoliosis, left her nearly bedridden. She's also battled ulcers, amoebic dysentery, bursitis, acute bronchitis, two serious bouts of pneumonia, drug and alcohol addiction and a benign brain tumor that was removed in 1997.

The actress has remained a tireless AIDS activist, making rare public appearances to support the cause. She used a wheelchair and was swathed in jewels at the dedication of the UCLA Clinical AIDS Research and Education Center in November 2005. Her performance of "Love Letters" in December generated more than $1 million for AIDS research.

Taylor won Oscars for roles in "Butterfield 8" in 1960 and "Who's Afraid of Virginia Woolf?" in 1966. She also won a special Oscar, the Jean Hersholt Humanitarian Award, mainly for her work as an AIDS activist, in 1993. She still lives in Bel-Air, a tony section of Los Angeles that's home to many of Hollywood's elite figures.

Her book, "Elizabeth Taylor: My Love Affair with Jewelry," was published in 2003. In it, Taylor writes about the many famous jewels in her personal collection, including the 33.19-carat Krupp diamond (a gift from Richard Burton) and the Duchess of Windsor diamond brooch.

Taylor continues to design her namesake jewelry line, available at posh retailers such as Christie's, and is developing a new fragrance.