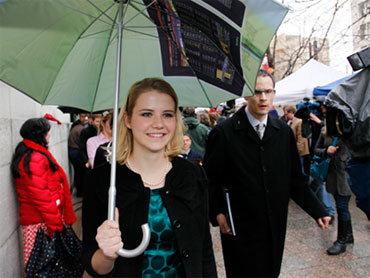 The man who kidnapped Elizabeth Smart and repeatedly raped her as he held her for more than nine months has been found guilty, and faces a possible life sentence.

Street preacher Brian David Mitchell, 57, took Smart, who was 14, at knifepoint in the middle of the night from the bedroom of her family's Salt Lake City home in June 2002.

And the lead prosecutor and jury foreman in the case told "Early Show Saturday Morning" co-anchor Rebecca Jarvis Smart's own testimony was critical to the trial's outcome.

Smart, now 23, told reporters outside the courtroom Friday the decision proves there is justice. "Today is a wonderful day," she said. " … It is possible to move on after something terrible has happened." Smart says she's eager to start a normal life.

Mitchell will be formally sentenced in May. His wife and co-conspirator in the case has already been sentenced to 15 years in prison.
Carlie Christensen, acting U.S. attorney for the state of Utah, led the case for the prosecution and told Jarvis on Saturday she wasn't taking anything for granted. "I was very confident of our trial team and I was very pleased with the evidence that was presented," Christensen said. "But I've been in this business long enough to know that there is never a slam-dunk with respect to a jury verdict. So, we were hopeful, we were confident, but we always knew there was a risk."

The jury foreman, who asked that the show not use his name, observed to Jarvis that it was "pretty easy" to decide on the main issues before the panel.

Christensen said she doesn't "think you can overstate" the importance of Smart's testimony. "She is a woman of extraordinary courage and determination," Christensen said. "She had a remarkable ability to recall the horrific details of that nine-month captivity and the ability to recount for the jury what that experience was like. She did it with amazing candor and amazing clarity and, again, I don't think you can overstate the importance of her testimony to the success of this case."

The jury foreman agreed, saying, "During the various segments of her testimony, when we'd take a break, we would go back to the jury room and there was very little talking. It was emotional, it was gut-wrenching.

"It was difficult to hear a young lady talk about things that were unspeakable. And particularly for those of us who have children, it's -- it was extremely emotional."

Christensen said she didn't think Mitchell's behavior in court had much impact on the jury. He had frequent outbursts and was singing hymns.

"The court was very sensitive to the disruptive nature of Mr. Mitchell's behavior," Christensen said. "Mr. Mitchell was frequently and regularly removed from the courtroom. And I think the trial teams were both prepared to deal with that sort of disruption and moved forward, again, with a very careful and thorough presentation of the evidence."