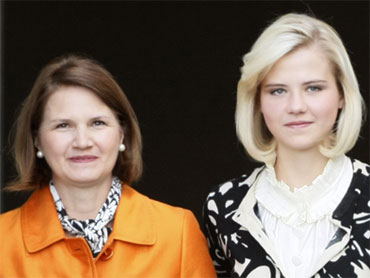 SALT LAKE CITY (CBS/AP) In the first day of testimony, Elizabeth Smart told a jury Monday that she thought she was having an especially realistic nightmare the night she was abducted by Brian David Mitchell.

Mitchell is charged with kidnapping and unlawful transportation of a minor in a federal court in Utah.

"It was just indescribable fear" when she realized she wasn't dreaming, Smart, who was 14 years old at the time, testified. "I remember him saying that I have a knife to your neck, don't make a sound, get out of bed and come with me or I will kill you and your family," she said.

Smart said she was still groggy and didn't immediately process what the man had said. "Then I heard it again and I was immediately wide awake."

Smart said she and Mitchell left the house and hiked three to five hours up a hill to a campsite, where Mitchell's now-estranged wife, Wanda Eileen Barzee, took her in a tent, sat her down on a bucket and washed her feet, Smart said.

Barzee also told her to take off her pajamas and underwear and put on a robe or "she would have the defendant come in and rip them off," she said.

Smart said Mitchell entered the tent wearing a similar robe and married them by pulling a sentence from the traditional Mormon marriage ceremony, called a sealing.

"He said, 'What I seal on this earth will be sealed to me in the hereafter and I take you to be my wife," she said, adding that she screamed and he threatened to duct tape her mouth shut.

"He proceeded to fight me to the ground and force the robes up," Smart said quietly, pausing, "where he raped me."

"I begged him not to. I did everything I could to stop him. I pleaded with him not to touch me but it didn't work."

Mitchell chained her to a table, making it impossible for her to flee, she said.

Smart's testimony followed that of her mother, Lois, the first witness of the day, who described the desperation she felt when she learned that her daughter had been kidnapped.

"It was utter terror. It was the worst feeling knowing that I didn't know where my child was. I was helpless."

Lois Smart also told the jury that she hired Mitchell, then known only as a homeless street preacher named "Immanuel," to do handyman work at the family home in the fall of 2001. She had encountered him on the street and one of her sons urged her to give him money.

In their opening statements, his defense attorneys say that Mitchell was influenced by an escalating mental illness and extreme religious beliefs that made him think he was doing what God wanted him to do.

Public defender Parker Douglas didn't dispute the facts but took issue with the prosecution's allegation that Mitchell is a calculating person who planned the kidnapping.

If he is convicted, Mitchell could spend the rest of his life in federal prison.

Smart was found in March 2003, nine months after her kidnapping, after motorists spotted her walking in a Salt Lake City suburb with Mitchell.