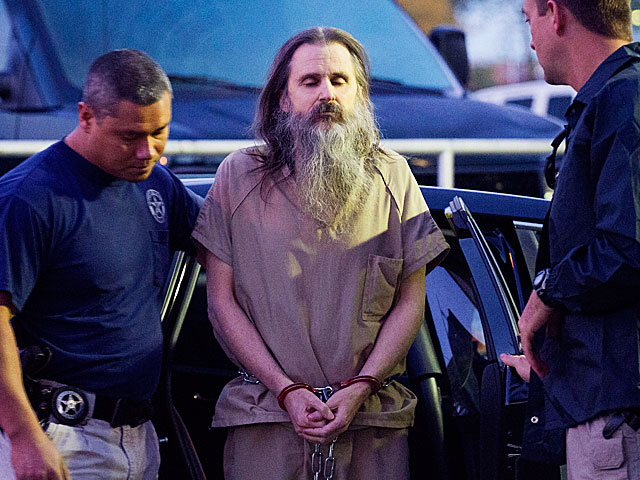 SALT LAKE CITY (CBS/AP) It's taken 8 years to get Brian David Mitchell, the man accused of kidnapping Elizabeth Smart and holding her captive for nine months as his "wife," to trial, and he quickly got kicked out of court Monday for singing hymns shortly after jury selection began.

U.S. District Court Judge Dale Kimball tolerated about a half-hour of Mitchell's soft hymns before ordering him out of the courtroom.

Kimball also rejected Mitchell's request to don the robes he was wearing when he was arrested with Smart, nine months after the girl vanished from her bedroom.

Jury selection began Monday in U.S. District Court for the former street preacher charged in the 2002 kidnapping. Brian David Mitchell was indicted in March 2008 on federal charges of kidnapping and unlawful transportation of a minor across state lines. If convicted, he could spend the rest of his life in prison.

Federal prosecutors moved to take over the case in 2008 after a parallel state court case stalled over questions about Mitchell's mental health.

Smart was 14 when she was kidnapped at knifepoint from her home on June 5, 2002. Now 22, Smart is expected to return to Utah from serving a mission for The Church of Jesus Christ of Latter-day Saints in France to testify against Mitchell. Smart testified for the first time last year as part of a competency hearing for Mitchell, saying that within hours of her kidnapping she was forced to become Mitchell's polygamous wife and endured repeated rapes and other abuses throughout her captivity.

Some 600 potential jurors were called. After exclusions based on hardships or responses to a 42-page juror questionnaire, about 220 remain and will be questioned in person by attorneys for both sides.

Jury selection could take several weeks, and the trial is expected to last into December.