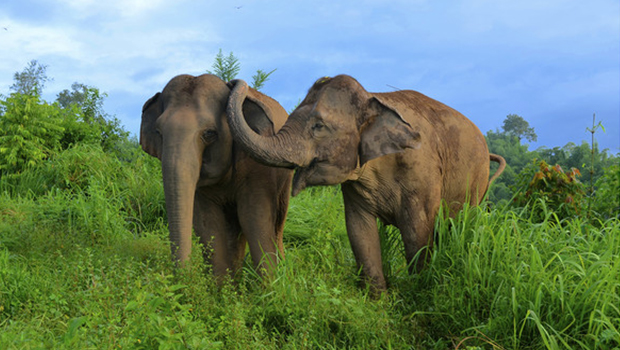 When elephants are feeling blue, they lend each other a trunk to cry on -- and then some. New research shows that Asian elephants comfort each other by making sympathetic noises and touching their trunks to the others' mouths or nether regions.

Published Feb. 18 in the journal PeerJ, the study followed the behaviors of 26 elephants between the ages of 3 and 60 years old, living in a sanctuary in northern Thailand. Adult male elephants were excluded from the study because in the wild, they are not part of the herd.
The researchers upset the animals by sending dogs walking past, placing snakes in the vicinity, and bringing in unfriendly elephants.
"When an elephant gets spooked, its ears go out, its tail stands erect or curls out, and it may emit a low-frequency rumble, trumpet or roar," said co-author Joshua Plotnik. Plotnik is a lecturer in conservation biology at Mahidol University in Thailand and chief executive of the nonprofit Think Elephants. "The consistency with which elephants responded to a friend in distress was quite remarkable. Rarely did an elephant give a distress call without a response from a friend or group member nearby."
When those distress calls went out, other members of the herd exhibited several behaviors specifically geared towards calming them down.
"Elephants get distressed when they see others in distress, reaching out to calm them down, not unlike the way chimpanzees or humans embrace someone who is upset," study co-author Frans de Waal, a professor at Emory University, told Science Now. The only other animals known to comfort peers are humans, great apes, dogs and some birds.
But while humans might offer a hug, elephants have an approach all their own: they reach out and touch their trunk to the other elephant's genitals, put their trunks in the other elephant's mouth, or make a high-pitched noise.
"Elephants do a lot of touching of others with their trunks. Genital touching is a way for elephants to identify others, and in this case, it may also be a way for the elephants to identify the behavioral state of the others," Plotnik said.
"I think the genital touching, in combination with other touches, specifically in this context, serves to reassure the other elephant," Plotnik said. "We also see the elephants put their trunks into each others' mouths, which seems to be a way of saying, 'I'm here to help you.'"

The deadliest animals on Earth, ranked
Thanks for reading CBS NEWS.
Create your free account or log in
for more features.
View CBS News In
CBS News App Open
Chrome Safari Continue
Be the first to know
Get browser notifications for breaking news, live events, and exclusive reporting.