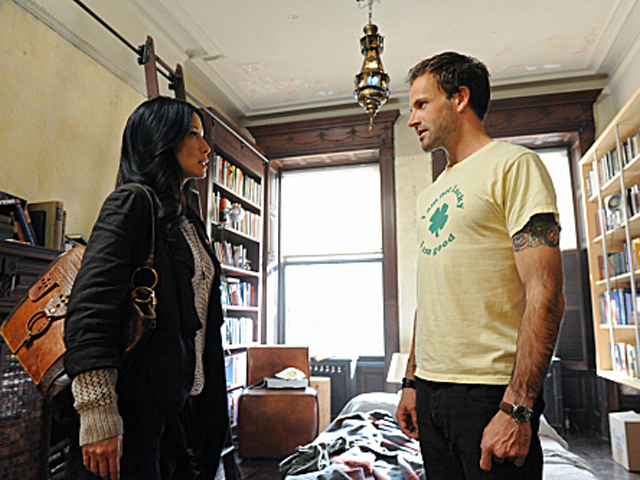 (CBS News) TV viewers tonight will be faced with a menu that includes "Elementary," a drama that draws on the past, and "Last Resort," a series rooted firmly in the present.

Both have won generally favorable reviews for their pilots and early episodes.

Tim Goodman of The Hollywood Reporter has called "Elementary," which debuts at 10 p.m. ET on CBS,"one of the most promising dramas this fall season."

It takes the oft-told "Sherlock Holmes" story and sets it in present-day New York with Holmes as a recovering drug addict and Watson as disgraced surgeon who's signed on as Holmes' sober-companion.

If you are seeing romance here, you may be disappointed. "Charlie's Angels" actress Lucy Liu, who plays Watson, told CBS News, "I think there's chemistry between us, but we're not going to go in that direction."

She described the relationship between her character and Miller's as more like a "bromance."

The show's creator, Rob Doherty, is an avid Arthur Conan Doyle fan and says he sees pieces of Sherlock Holmes in many of the crime shows on TV. Doherty told TV journalists this summer that his Holmes will have an addictive personality - hooked on not just the drugs mentioned in the mystery novels, but also addicted to puzzles and their solutions.

On the other end of the spectrum is "Last Resort," airing at 8 p.m. ET on ABC, which has been described as something of a cross between "Lost" and "Homeland."

Andre Braugher plays a submarine commander ordered to fire nuclear weapons at Pakistan. When he and his crew question the legitimacy of the commands (because they come over a channel only to be used if the government is overturned) , they find themselves the target of friendly fire. They surface and take their damaged submarine to a remote Pacific Island that once was home to a NATO tracking station. Here, they hope to find out what has happened to the world and plot their next course.

"There's a whole Washington, D.C., mystery," Braugher told an interviewer, "about who's in control. As far as we're concerned, we are essentially blameless in this, in that we have been attacked for asking a question -- not for refusing an order, but for asking a question."

Serving in the cast with Braugher are Scott Speedman, Daisy Betts and Daniel Lissing. Show creator Shawn Ryan comes to the project with experience from such high-octane hits as "The Unit" and "The Shield."

Ryan told an interviewer that he spoke with many submarine crews who said that, "unlike some other branches of the military, they're encouraged to be critical thinkers and encouraged to question something of this kind of import if there is a snag in the routine in some way."

That kind of research and attention to detail might be one reason why critics are so glowing in their comments.

Consider this, from TV Guide critic Matt Roush: "This series is like nothing else on network TV, which is why one's first impulse is to pray for its survival."