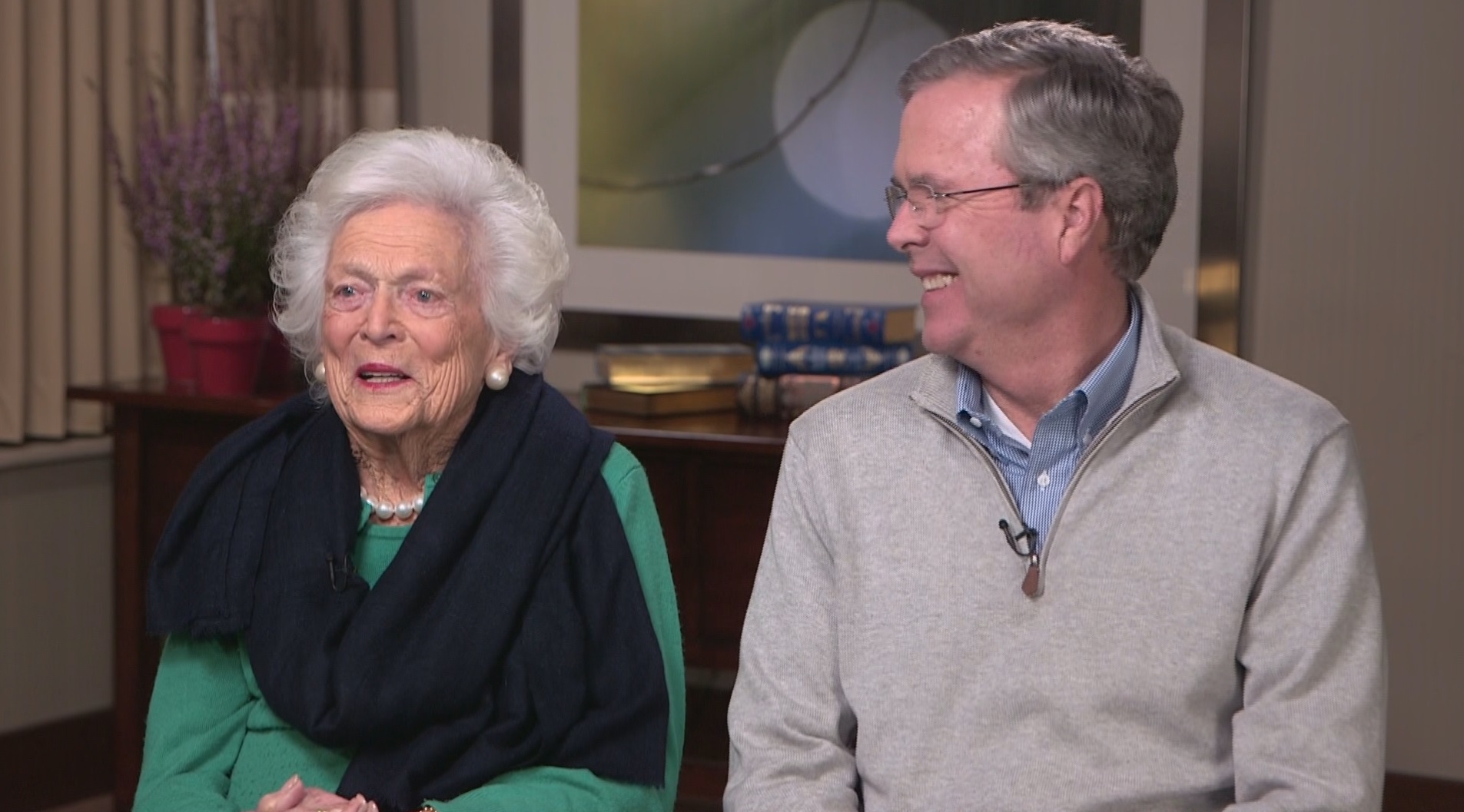 Jeb Bush is looking for a comeback after finishing sixth in Iowa. The ex-Florida governor and his mother, former first lady Barbara Bush, spoke with CBS News Thursday in New Hampshire, where he's fighting to turn out the votes.

Around Manchester, New Hampshire, it's not uncommon to see presidential candidates pop into roadside diners. But Jeb is hoping his presence in New Hampshire is anything but common.

"Do well here. The message is one that I'm a proven leader. We are electing a president, not a back-bencher in the United States Senate, so you better be ready to lead," Bush said. "You better be able to have the experience of making a tough decision."

"What do you mean a back-bencher?" O'Donnell asked.

"I mean there are people running who are gifted orators. But they've never done anything in their life that would lead to believe they can make a tough decision. ... I mean Marco [Rubio] today had a hard time being able to describe his record of accomplishment," Bush said. "It's hard in this environment where nothing gets done, but don't brag about things you haven't done."

Bush said even if he can't beat Rubio in New Hampshire, it won't be the end of his campaign.

"As I said, this is the first delegate will be selected on Tuesday," he said. "We got 99 percent of the delegates left. It's a long way to go. And I think the voters of the country out to decide that not the pundits."

To help convince the New Hampshire voters, he brought a secret weapon: his mother. At age 90, Mrs. Bush said she flew up from Houston to be alongside her son as he campaigns for president for a few reasons.

"'Cause I love my son and I know that America needs him. He's honest, dependable, loyal, relatively funny! Good looking, but funny," Mrs. Bush said in her first TV interview since the campaign started. "He's got the same values that America seems to have lost. ... He's almost too polite. I don't advise him, but if I gave him advice: I would say, 'Why don't you interrupt like the other people do?'"

"You mean interrupt during the debates?" O'Donnell asked.

"Yes. He's so polite. We brought him up that way," Mrs. Bush responded. "And he does not brag like some people we know."

"Who are you talking about?" O'Donnell asked.

"You can say it," Jeb Bush said, chuckling.

"Do you think someone else that is running for president is bragging too much?" O'Donnell asked.

"I'm not getting into a spitting match with him. He can spit further than I can," Mrs. Bush said.

On Thursday, Republican candidate Donald Trump was profane at his rally in Portsmouth, New Hampshire.

"I don't think a president would have ever shouted profanities in a speech in front of thousands of people with kids in the crowd," Jeb Bush said.

"Who did that?" his mother asked.

"Your buddy. He does it all the time. That's different because our culture is different. That would never have been acceptable in the age of Reagan or my dad," he said.

"Yes, I mean, unbelievable. I don't know how women can vote for someone who said what he said about Megyn Kelly. It's terrible. And we knew what he meant too. Don't you get in his firing line!" Mrs. Bush said. "And money doesn't buy everything. It's accomplishments and what you're doing and giving. It's incomprehensible to me."

In a campaign ad running in New Hampshire, Mrs. Bush said, "When push comes to shove, people are going to realize Jeb has real solutions rather than talking about how popular they are or how great they are." She also said Jeb had a big heart.

"I don't know if you know what Donald Trump tweeted about that ad," O'Donnell told Mrs. Bush. "He mocked your son turning to you and he tweeted saying, 'Just watched Jeb's ad where he desperately needed mommy to help him. Jeb, mom can't help you with ISIS, the Chinese, or with Putin.'"

"He didn't endorse me, just for the record," Bush said.

"No, he endorsed Trump!" Mrs. Bush said. "That's an endorsement you don't want."

While Mrs. Bush is stumping for Jeb in New Hampshire, Jeb's brother, former president George W. Bush, will be campaigning in South Carolina.

"The family is now coming out. Is it a sign of strength or a sign of desperation?" O'Donnell asked.

"And he's sort of walking this line trying to run as himself and at the same time distinguish himself, distinguish, I'm sure, from your brother and the former president. Is it a tough line to walk?" O'Donnell asked.

"You said it's okay to have another Bush in the White House. What about another Clinton?" O'Donnell asked.

"I don't think so because another Bush is going to beat another Clinton," Mrs. Bush said.

"But do you think America is ready for its first female president?" O'Donnell asked.

"Yes. But I don't think either one running is the one we need," Mrs. Bush said.

"I'm for the old guy that's the all star, the all pro," he said. "The guy that you can rely on. The guy who has a proven record. The guy who can change the course of the country's history. So I'm for Peyton."