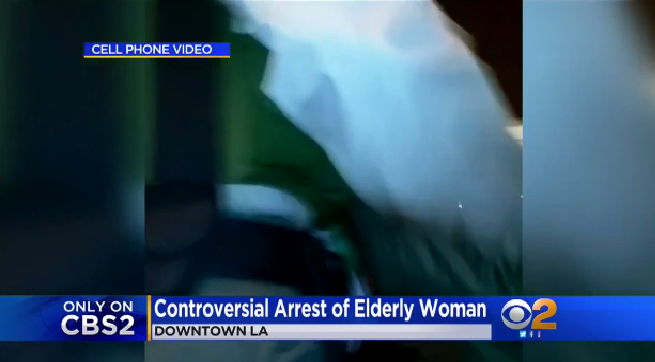 LOS ANGELES -- Los Angeles County sheriff's deputies are being criticized for the way they treated an elderly woman who refused to leave a reserved seating area in a train station in downtown Los Angeles.

CBS Los Angeles reports sheriff's deputies forcibly removed the 76-year-old woman from her seat in Union Station. Her friend, who only wishes to be identified as Tina, captured the disturbing incident on video.

In the clip, the woman is heard repeatedly saying, "You are hurting me," as two sheriff's deputies place her in handcuffs.

Tina says her friend often sits in the reserved seating area at the train station and is rarely bothered. She has a card from a Metro officer, which she thought allowed her to sit in the space. So, when sheriff's deputies told her to leave, she refused and was subsequently arrested.

But there was one problem -- the woman couldn't get out of her seat.

In the video, she is heard asking for her cane. To which a sheriff's deputy responds, "I will give you your cane once you stand up," and the woman replies, "No, hand me my cane so I can stand up."

When she didn't stand up, a sheriff's deputy pushed her head down. The woman is then heard screaming, "Stop, stop!"

"It did not need to escalate to that point," she said to CBS Los Angeles. "It was past excessive in my opinion. She, I'm sure, weighs no more than 95 pounds wet. I was really shocked and traumatized witnessing this."

The woman was released from jail. However, she may still face charges for obstructing an officer.

A spokesman with the sheriff's department says the incident remains under review to determine if reasonable force was used.

Authorities have yet to watch the cell phone video, but say they hope it will assist in the investigation.