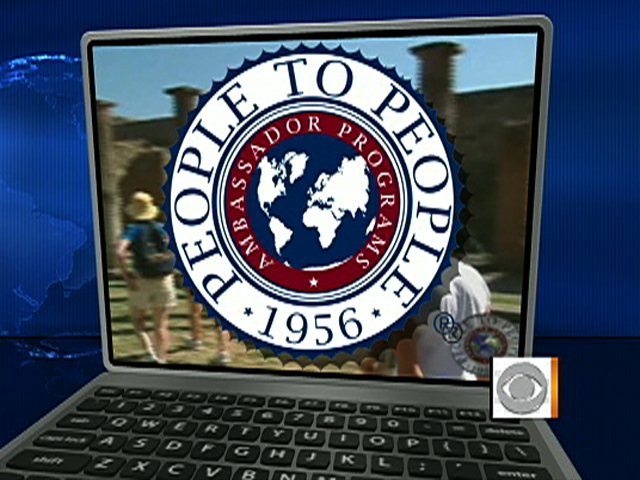 People to People was founded by President Eisenhower in 1956 to promote world peace through cultural exchange. Now, it's a non-profit run  by Eisenhower's granddaughter, Mary Jean. And each year, tens of thousands of middle or high school kids get invitations to go on People to People foreign exchange trips. In 2010, 26,657 travelers went on People to People programs to 45 countries.

But critics charge the organization with deceptive marketing practices - even fraud. And CBS News Investigative Reporter Sharyl Attkisson checked it all out and shared her report on "The Early Show."

Attkisson said, "Who wouldn't feel honored to get an invitation for a People to People trip?"

After all, she noted, the invitation bears President Eisenhower's name, the names of almost every president since, and the "Teacher of the Year" logo.

And students may even get a nudge of encouragement from an elected official. One letter bears the signature of Virginia State Sen. Jill Vogel.

Vogel went on a People to People trip to the Soviet Union when she was in high school in 1986.

Vogel told CBS News, "On many levels, it was really an extraordinary experience."

A two- to three-week People to People trip, the invitation promises, will set middle and high school students "apart on college applications and in consideration for other honors."

Many parents scrape - even fund-raise - to get the fee for the trip: $5,000 to $8,000 per child. They believe their kids won an honor from a non-profit run by President Eisenhower's granddaughter. But the experience of Steve and Jennifer Barbee indicates otherwise.

The Barbees' daughter, Katelynn, got invited on a People to People trip this summer with other "high school students" from Tennessee. But Katelynn died back in 1996 when she was 10 days old.

CBS News found the same story in Iowa - a boy supposedly "recommended for the honor" of a People to People trip for his "outstanding middle school achievements." Impossible, said the mom in a letter, because her son "died at seven weeks of age in 1993."

Miller said, "They seem to be marketing these trips based on people receiving an honor or earning it, when that wasn't the case. It wasn't an honor; it was more of a commercial solicitation to take the trip."

Letters promoting the summer trips appear to come from People to People. But, Attkisson said, CBS News found they're actually from a for-profit travel agency - one that paid millions of dollars in licensing fees for exclusive use of People to People's name.

That travel agency is Ambassadors Group but, Attkisson noted, you won't see their name on the invitation letters. Chief Executive Officer Jeff Thomas reportedly earned $1.4 million last year. And in May, the local Better Business Bureau revoked Ambassadors' accreditation, in part because of the Iowa Attorney General's complaints.

According to letters to CBS News, the company says it's "working cooperatively with the Better Business Bureau and "expect(s) that our previous high ranking should be restored."

Attkisson wanted to talk to Thomas and People to People CEO Mary Jean Eisenhower. But, when CBS News asked for interviews, both declined to talk on camera. Ambassadors Group's lawyers accused CBS News of conducting a "slanted, inaccurate and hostile investigation."

And remember that letter some would-be travelers got from Virginia State Sen. Vogel?

Vogel said, "It was a letter that clearly forged my signature."

Attkisson asked, "You didn't write the letter? You didn't sign that letter. You didn't authorize it."

Vogel, an ethics attorney who did make that People to People trip in high school years ago, says she was outraged to discover a letter on People to People stationery written in her voice, in first person, in her name. It encouraged students to "embrace" the opportunity.

Attkisson asked Vogel, "You would never agree to let your name be used like this?"

"No. No," Vogel said. "That would leave, clearly, the impression that somehow I had a direct association with them or that I was a spokesperson on their behalf, or that I had some formal connection to them."

Attkisson said, "None of that's true?"

Vogel replied, "Absolutely none - none at all."

Ambassadors Group told CBS News, "We take full responsibility for the misunderstanding," with State Sen. Vogel and "deeply regret any concerns this has caused her." Under pressure from the Iowa attorney general, Ambassadors Group agreed to alter its marketing practices and pay $50,000 to the State Consumer Fraud Fund. Ambassadors told CBS News the agreement was "voluntary, to alleviate any future concerns."

Yet, Attkisson pointed out, families of thousands of children traveling this summer may have little idea that their trip is not the honor they think it is.