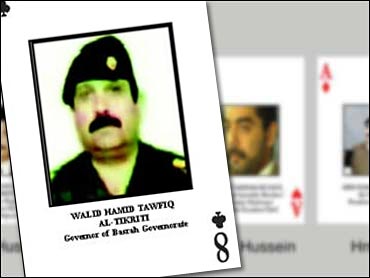 The governor of southern Iraq's Basra province, a member of Saddam Hussein's clan, turned himself in and is in custody, the exile Iraqi National Congress said Tuesday.

Wahid Hamed Tawfiq al-Tikriti, No. 44 on the U.S.-led coalition's most-wanted list, handed himself in to the INC in Baghdad, according to Haidar al-Moussawi, a London-based spokesman for the group.

He was being interrogated Tuesday night by both U.S. forces and INC representatives, al-Moussawi said.

"They will decide in the field" when to turn him over to U.S. custody, al-Moussawi said.

In Doha, Qatar, U.S. Central Command had no comment and could not immediately confirm that the governor was in custody.

U.S. officials did announce that one of Saddam Hussein's top advisers, who once headed Iraq's top-secret missile program and later served as oil minister, had surrendered.

Amer Mohammed Rashid, known to U.N. weapons inspectors as the "Missile Man," was ranked 47th on the U.S. most-wanted list.

As governor of Basra, Tawfiq could face questioning about some of the tactics employed during the last days of the city's resistance to attack by British troops. Some unconfirmed reports indicated that Iraqi troops fired on civilians in the city and used them as human shields. It is unclear what caused the power in the city to fail early in the war, shutting down the water system for days.

Rashid, who surrendered Monday, is a former general who oversaw Iraq's top-secret missile programs. He is married to Dr. Rihab Taha, a microbiologist known as "Dr. Germ" who was in charge of the secret Iraqi facility that weaponized anthrax and other toxic substances.

She also is sought by the United States; her Baghdad house was raided by U.S. forces last month, but there was no word on her whereabouts.

Rashid was a member of Saddam's Military Industrialization Organization, the group responsible for producing Iraq's most lethal weapons.

Chief U.N. weapons inspector Hans Blix said last month that Rashid and his wife would be among "the most interesting persons" for American investigators to interrogate because of their familiarity with a range of Saddam's secret weapons programs.

Despite the Bush administration's contention that Iraq possessed large stockpiles of biological and chemical toxins, none have been found. President Bush has said that as troops turn from fighting to finding weapons, the illegal arsenal will be unearthed — especially if captured Iraqis cooperate.

Tuesday's reports bring the number of wanted leaders in custody to 15. At least one other – Ali "Chemical Ali" Hasan Al-Majid — was reported killed in an airstrike, although there are reports from some witnesses who claimed he survived the attack.

Others who are not among the top 55 most wanted officials have also been nabbed.

Central Command has said it may have others in custody who have not been publicly acknowledged.

The fate of the man at the top of the wanted list, Saddam, remains unclear. This week, USA Today reported that another Iraqi leader in U.S. custody, former deputy prime minister Tariq Aziz, has said that Saddam survived both airstrikes aimed at killing him.