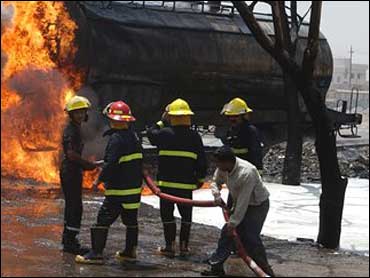 The attacks began about 2:30 p.m. against four Iraqi checkpoints along a road between Baqouba and Baghdad, 35 miles to the southwest, police Col. Mudhafar Mohammed said.

Attackers fired automatic weapons and rocket-propelled grenades during the attacks, he said. Another police official, Col. Mohammed Hussein, said fighting was continuing into late afternoon and that at least eight people: three soldiers, four policemen and one civilian had been wounded.

There was no report of insurgent casualties.

The attacks occurred a day after three American soldiers died in two separate bombings, one in Samarra, 60 miles north of the capital, and the other in northern Baghdad. Two U.S. soldiers died in the Baghdad attack.

On Sunday, four American soldiers from Task Force Baghdad were killed when their vehicle ran over a roadside bomb in southwest Baghdad.