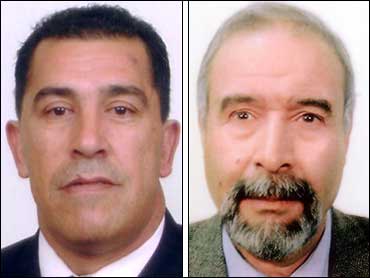 Al Qaeda in Iraq claimed responsibility Wednesday for killing two Algerian diplomats who were kidnapped in Baghdad last week, the second slaying of Arab envoys in Iraq this month.

Algerian state radio said Ali Belaroussi and Azzedine Belkadi had been killed, although the announcement from President Abdelaziz Bouteflika did not provide the source of the information.

Belaroussi, 62, and Belkadi, 47, were kidnapped at gunpoint July 21 in Baghdad's upscale Mansour area.

"The head of the Algerian mission Ali Belaroussi and the diplomat Azzedine Belkadi, whose government is ruling in violation of God's will, were killed," said a statement from al Qaeda in Iraq that appeared on an Islamic Web site.

They were slain because of the Algerian government's repression of Muslims in their north African country, the Internet statement said.

In a video made public Tuesday, the pair appeared blindfolded and in captivity, giving their names and home addresses.