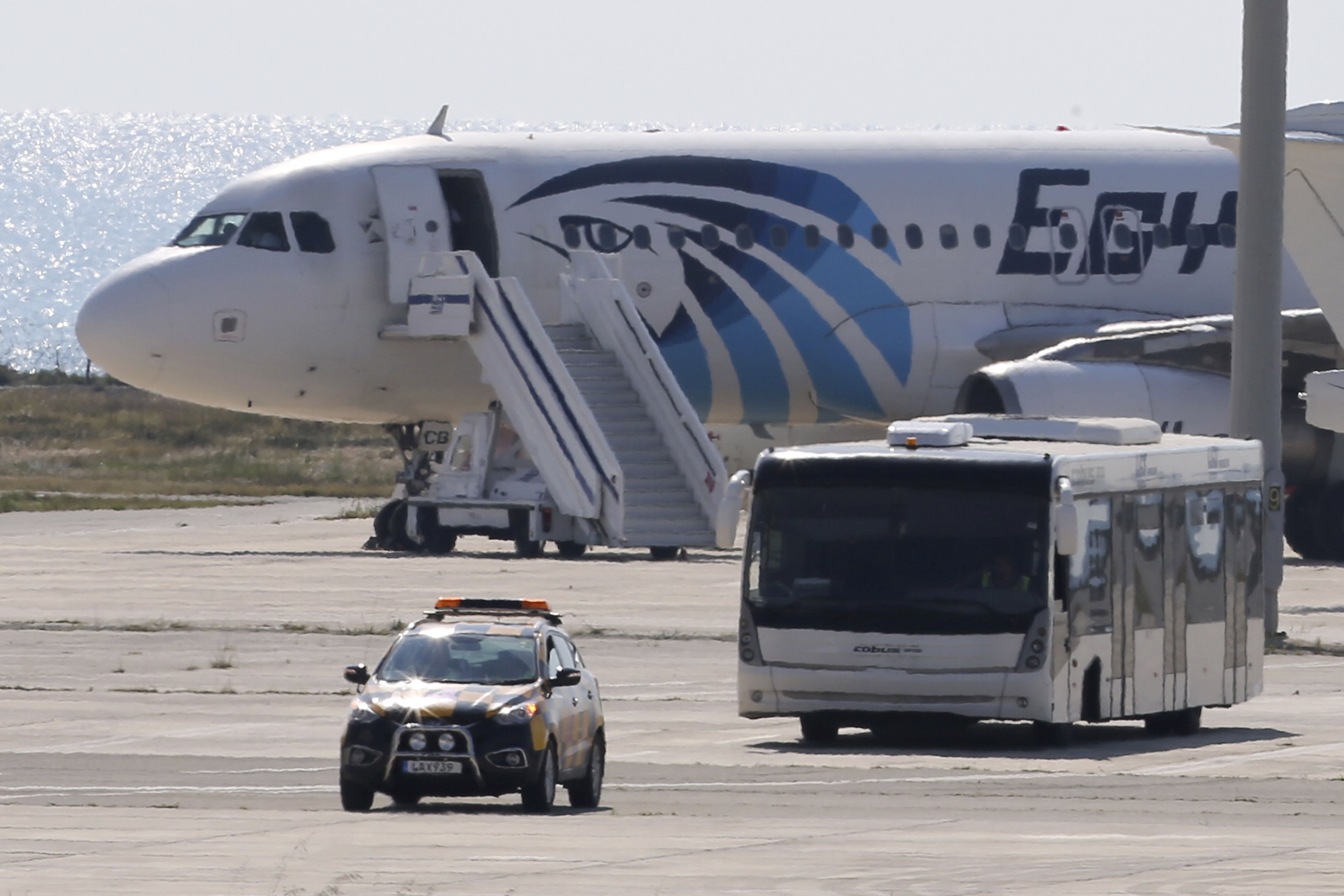 LARNACA, Cyprus - An Egyptian wearing a fake explosives belt who hijacked a domestic EgyptAir flight and forced it to land in Cyprus on Tuesday surrendered and was taken into custody after releasing all passengers and crew unharmed following an hours-long standoff.

Officials said early on that the hijacking was not an act of terrorism, and later that the man appeared to be psychologically unstable. However, the incident was likely to renew concerns about Egyptian airport security months after a Russian passenger plane was downed over the Sinai Peninsula in a bombing claimed by the Islamic State of Iraq and Syria (ISIS.)

"From the start, it was clear that this wasn't an act of terrorism, and despite the fact that the individual appeared to be dangerous in terms of his behavior, we understood that this was a psychologically unstable person," Cyprus' Foreign Minister Ioannis Kasoulides told reporters.

He said the man initially asked to speak with his Cypriot ex-wife, who police brought to the airport.

"After that, he started asking for European Union representatives to assure him about matters that had no logical basis," Kasoulides said.

At one point the hijacker demanded the release of women held in Egyptian prisons, but he then dropped the demand and made others. "His demands made no sense or were too incoherent to be taken seriously," the minister said, adding that the contents of a letter the hijacker wanted to give to his ex-wife "were also incoherent."

Egypt's official Middle East News Agency identified the hijacker as Seifedeen Mustafa, without providing further details. A senior Cypriot official confirmed the name of the hijacker, but also provided no further details. Police in Cairo were questioning the hijacker's relatives, Sharif Faisal, the police chief for the industrial suburb of Helwan, told The Associated Press.

Video obtained by the private Egyptian TV network Youm7 showed a man identifed as the suspect going through a routine security screening at the airport in Alexandria. He is seen walking through a metal detector and then being patted down before he's allowed to reclaim his scanned bags and proceed.

Cyprus President Nicos Anastasiades, in an earlier appearance alongside European Parliament President Martin Schulz in Nicosia, was asked whether the incident involved a woman. "Always, there is a woman," he replied, drawing laughter.

Just minutes before the arrest, local TV footage from the airport showed several people disembarking from the aircraft and a man who appeared to be a crew member climbing out of the cockpit window and sliding down the side of the plane. The hijacker had earlier freed most of the passengers but kept on board seven people - four crew members and three passengers.

A Cypriot police official, who spoke on condition of anonymity because he was not authorized to brief reporters, said the hijacker walked off the plane and was taken into custody by anti-terrorism police. He said the man wore a belt, but it contained no explosives. Egypt's Civil Aviation Ministry said man was wearing a fake explosives belt.

Flight MS181 took off Tuesday morning from Bourg el-Arab airport just outside the Mediterranean coastal city of Alexandria en route to Cairo with at least 55 passengers, including 26 foreigners, and a seven-member crew.

An official with flight-tracking website FlightRadar24 said the plane showed no immediate signs of distress. The flight between Alexandria and Cairo normally takes about 30 minutes.

Egyptian officials gave conflicting accounts as the drama unfolded. The Aviation Ministry said in a statement that the hijacker was wearing an explosives belt, which turned out to be untrue.

Egyptian government spokesman Hossam al-Queish identified the hijacker as Ibrahim Samaha, but an Egyptian woman who identified herself as Samaha's wife told a local TV station that her husband is not the hijacker and was on his way to Cairo so he could fly to the U.S. to attend a conference. She said a photo circulated by Egyptian and regional TV channels purportedly showing the hijacker was not her husband.

The Egyptian Civil Aviation Ministry said the foreigners on board included eight Americans, four Britons, four Dutch, two Belgians, a French national, an Italian, two Greeks and one Syrian. Three other foreigners could not be identified.

The initial group of passengers released by the hijacker was seen calmly walking off the plane down a set of stairs, carrying their hand luggage and boarding a bus. Security was tight at the airport, with police repeatedly pushing back reporters and TV crews working just outside the fence, near where the aircraft stopped. Police also evacuated a nearby beach popular with tourists.

Egyptian passenger Farah el-Dabani told the Dubai-based Al-Arabiyah TV network that the hijacker was seated in the back of the aircraft and that it was the crew who told passengers that the plane was being hijacked.

"There was panic at the beginning, but the crew told us to be quiet. They did a good job to keep us all quiet so the hijacker does not do anything rash," she said in a telephone interview.

The hijacking will most likely bring to the fore again the question of security at Egyptian airports, five months after a Russian aircraft crashed over Egypt's Sinai Peninsula minutes after it took off from Egypt's Red Sea resort of Sharm el-Sheikh. All 224 people on board were killed in the crash.

Russia later said an explosive device brought down the aircraft and the Islamic State of Iraq and Syria (ISIS) said it had downed the plane with a bomb contained in a drink can.