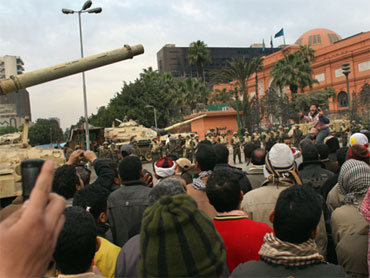 CAIRO - Egypt's prime minister said today that stability is returning after 12 days of anti-government protests, appearing confident a resolution to the crisis can be reached without the immediate removal of President Hosni Mubarak.

The comments by Prime Minister Ahmed Shafiq on state TV suggest the government may calculate it can ride out protests and reach a deal with its opponents without Mubarak's ouster.

Shafiq said a 100,000-strong demonstration Friday failed to force Mubarak out as protesters hoped. "We haven't been affected, and God willing next Friday we won't be affected," he said. "All this leads to stability."

Mubarak has staunchly refused to leave, insisting on serving out the rest of his term until September, and his aides have repeatedly said in recent days that the country's leader of nearly 30 years must not be dumped in a humiliating way.

Leaders of Egypt's protest movement held talks with the prime minister over ways to ease Mubarak out of office. Under one proposal, the 82-year-old leader would hand his powers to his vice president, though not his title immediately, to give him a graceful exit. Shafiq's comments today suggest that no such exit has been agreed upon.

And so the daily protests continue, with no sign of going away.

Strassman says the army, which has been providing security here, is getting tired of this, to some degree. They want these protesters to go home, reminding them time and time again that in the opinion of the army, the message that these protesters have sent has been received - that President Mubarak is going to leave the stage.

The protesters, in turn, say they will not stop their giant rallies or enter substantive negotiations on democratic reform until Mubarak quits.

Three more million-strong marches are planned for later next week.

A self-declared group of Egypt's elite - called the "group of wise men" - has circulated ideas to try to break that deadlock. Among them is a proposal that Mubarak "deputize" his Vice President Omar Suleiman with his powers and, for the time being at least, step down in everything but name.

The "wise men," who are separate from the protesters on the ground, have met twice in recent days with Suleiman and the prime minister, said Amr el-Shobaki, a member of the group. Their proposals also call for the dissolving of the parliament monopolized by the ruling party and the end of emergency laws that give security forces near-unlimited powers.

Late Friday, a delegation from the protesters themselves meet with Shafiq to discuss ways out of the impasse, said Abdel-Rahman Youssef, a youth activist who participated in the meeting.

Youssef told The Associated Press on Saturday that the meeting was not a start of negotiations. "It was a message to see how to resolve the crisis. The message is that they must recognize the legitimacy of the revolution and that president must leave one way or the other, either real or political departure," he said.

The protesters are looking into the proposal floated by the "wise men," said Youssef, who is part of the youth movement connected to Nobel Peace laureate and prominent reform advocate Mohamed ElBaradei.

"It could be a way out of the crisis," Youssef said. "But the problem is in the president...he is not getting it that he has become a burden on everybody, psychologically, civicly and militarily."

Israa Abdel-Fattah, a member of the April 6 group, another of the youth movements driving the demonstrations, said there is support for the wise men's proposal among protesters.

Youssef underlined that the 12-day-old protests will continue in Tahrir Square until Mubarak goes in an acceptable way.

"There is no force that can get the youth out of the square. Every means was used. Flexibility, violence, live ammunition, and even thugs, and the protesters are still steadfast," he said, referring to an assault by regime supporters on Wednesday that sparked 48 hours of heavy street fighting until protesters succeeded in driving off the attackers.

On Saturday, soldiers moved vehicles that protesters used as barricades during the fighting, but protesters argued with them for the vehicles to remain. Rumors also circulated in the square that the military - which has surrounded Tahrir for days - was preparing to withdraw, so some protesters lay on the ground in front of tanks to prevent them. The protesters see the military as a degree of protection from police or regime supporters they fear will attack again, though the government promised Friday not to try to eject the protesters by force.

The emergence of various talks and players marked a new stage in the evolution in the crisis as all sides try to shape the post-Mubarak transition.

Suleiman and Shafiq - both military men, like Mubarak, and regime stalwarts who were appointed to the posts last week - have led the government's handling of the crisis. They have sought to draw the protesters and opposition groups into negotiations to quickly enact constitutional reforms so elections for a new president replacing Mubarak can be held in September.

Protesters, however, are wary of a trap. They fear that without the pressure of protesters in the streets demanding democracy, the regime will carry out only superficial reforms while keeping its grip on power. So they are reluctant to end the demonstrations without the concrete victory of Mubarak's ouster and assurances on what happens next.

El-Shobaki, of "the wise men," said Suleiman did not respond to their proposal that Mubarak deputize him.

The "wise men" are comprised of about a dozen prominent public figures and jurists, including former Cabinet minister and lawyer Ahmed Kamal Aboul-Magd, businessman Naguib Sawiris and political scientist academics like el-Shobaki. "We don't represent the youth on the ground. We keep in touch with them," said el-Shobaki.

The protest organizers themselves are a mix. The majority are young secular leftists and liberals, who launched the wave of protests though an Internet campaign, but the fundamentalist Muslim Brotherhood also has built a prominent role. They have succeeded in drawing a startlingly broad cross-section of the public, including the urban poor, lower middle class and young upper class.

Protest organizers have formed a committee that will carry out any future negotiations with the government over reforms. The committee includes ElBaradei, the Muslim Brotherhood and representatives of the youth factions.