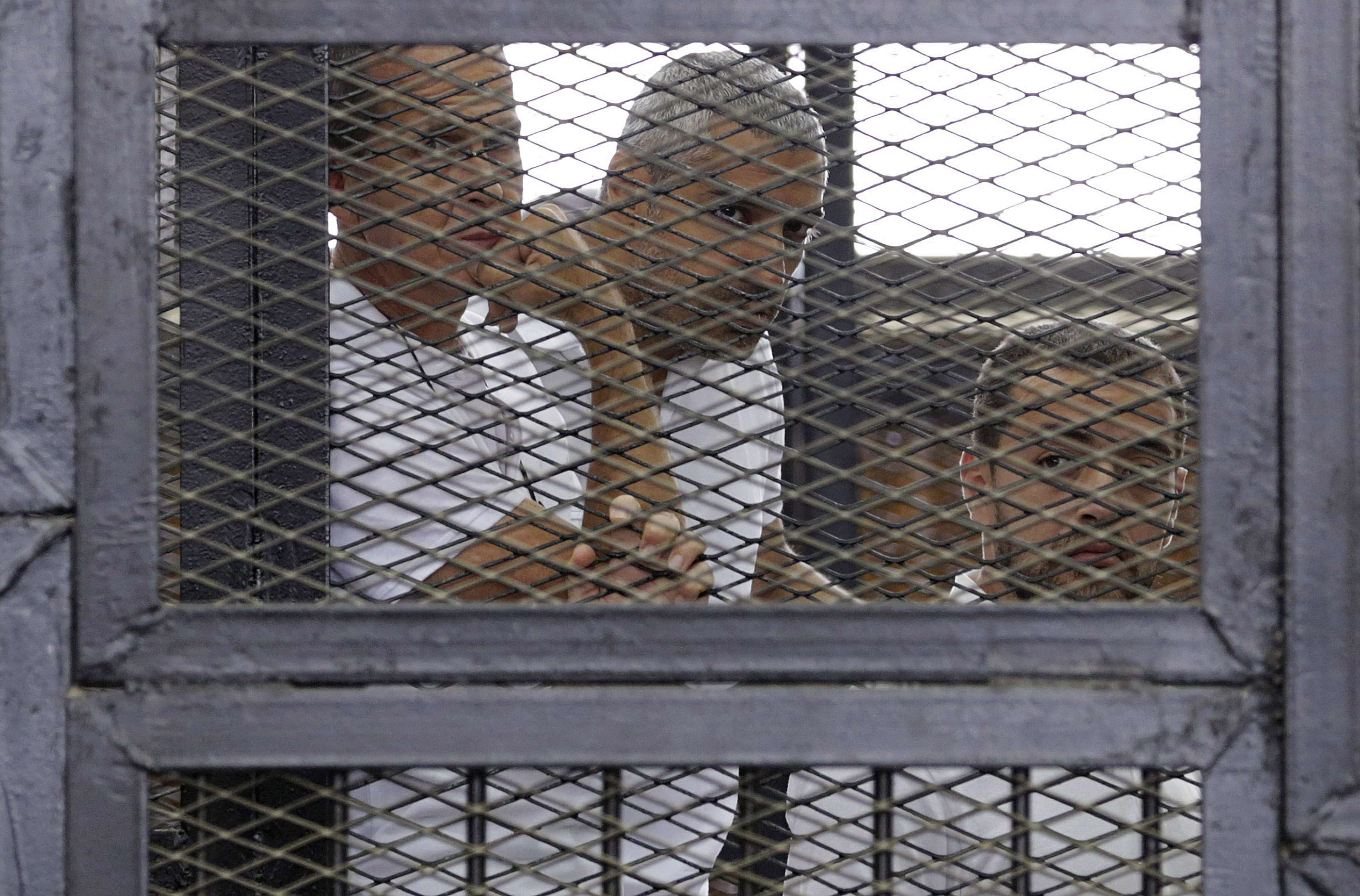 CAIRO -- An Egyptian court on Monday convicted three journalists from Al-Jazeera English and sentenced them to seven years in prison each on terrorism-related charges in a case that has brought an outcry from rights groups.

"I swear they will pay for this," Fahmy shouted angrily from the defendants' cage after the sentences were announced. Greste raised his fists in the air.

"They just ruined a family," said Fahmy's brother Adel, who was attending the session. He said they would appeal the verdict but added that he had little faith in the system. "Everything is corrupt," he said.

In a statement released Monday, Al-Jazeera said the verdict "defies logic, sense, and any semblance of justice," and vowed to"continue with resolve until Peter, Baher and Mohammed are free."

Greste, Fahmy and Mohammed were arrested in December in a raid on the Cairo hotel room they were using as an office, as part of a sweeping crackdown on Islamist supporters of ousted President Mohammed Morsi.

They were accused of supporting Morsi's Muslim Brotherhood, which the authorities have declared a terrorist organization. They also face charges of fabricating footage to undermine Egypt's national security and make it appear the country was facing civil war.

In a written statement issued after the verdict and sentences were announced, the Public Prosecutor's office said the men had been convicted of creating recordings and other matieral "to be shown to others and presented before the public in Egypt and abroad, with the aim of giving the impression to foreign public opinion that Egypt is undergoing a civil war, in order to weaken the state and its standing, harm the national interests of the country, agitate public security, spread terror among the people, and damage public interests."

State security officers testified that the Al-Jazeera Arabic network was editorially biased in favor of the Muslim Brotherhood and that the accused staffs' mere employment by the network constituted support for terrorism. But the journalists work for Al-Jazeera English, an editorially separate operation, but a distinction the government never seemed to acknowledge.

Ortiz notes that the verdict was handed down just a day after U.S. Secretary of State John Kerry visited Cairo. Kerry said that he personally raised the Al-Jazeera case with Egypt's new president Abdel-Fattah el-Sissi -- but that didn't help.

On Monday, Secretary Kerry told reporters in Iraq that when he heard the verdict, "I was so concerned about it,frankly, disappointed in it, that I immediately picked up thetelephone and talked to the foreign minister of Egypt andregistered our serious displeasure."

The three and their supporters have said they were simply doing their jobs as journalists, covering the wave of protests led by the Brotherhood against the military-backed government installed after Morsi's ouster on July 3 by then-army chief el-Sissi. The police crackdown on the protests has killed hundreds and put thousands more in prison.

British ambassador James Watt, also attending, said he was "very disappointed" by the verdict. "Freedom of expression is fundamental to any democracy," he said.

The other defendants were mainly students, arrested separately, accused of providing the Al-Jazeera journalists with footage along with a variety of other charges, including belonging to the Brotherhood.