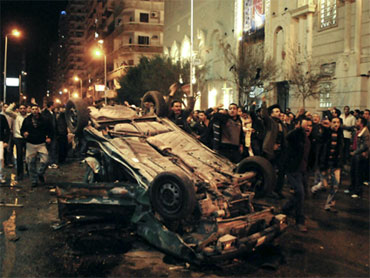 A powerful bomb, possibly from a suicide attacker, exploded in front of a Coptic Christian church as a crowd of worshippers emerged from a New Years Mass early Saturday, killing at least 21 people and wounding nearly 80 in an attack that raised suspicions of an al Qaeda role.

The attack came in the wake of repeated threats by al Qaeda militants in Iraq to attack Egypt's Christians. A direct al Qaeda hand in the bombing would be a dramatic development, as Egypt's government has long denied that the terror network has a significant presence in the country. Al Qaeda in Iraq has already been waging a campaign of violence against Christians in that country.

Police initially said the blast came from an explosives-packed car parked outside the Saints Church in the Mediterranean port city. But the Interior Ministry later said it was more likely from a suicide bomber who blew himself up among the crowd.

Both tactics are hallmarks of al Qaeda and have been rarely used in Egypt, where the government crushed an insurgency by Islamic militants in the 1990s. Though the government of President Hosni Mubarak denies an al Qaeda presence, Egypt does have a rising movement of Islamic hard-liners who, while they do not advocate violence, adhere to an ideology similar in other ways to al Qaeda. There have been fears they could be further radicalized amid growing sectarian tensions between Egypt's Muslim majority and Christian minority.

Nearly 1,000 Christians were attending the New Year's Mass at the Saints Church, said Father Mena Adel, a priest at the church. The service had just ended, and some worshippers were leaving the building when the bomb went off about a half hour after midnight, he said.

"The last thing I heard was a powerful explosion and then my ears went deaf," Marco Boutros, a 17-year-old survivor, said from his hospital bed. "All I could see were body parts scattered all over - legs and bits of flesh."

Blood splattered the facade of the church, as well as a mosque directly across the street. Bodies of many of the dead were collected from the street and kept inside the church overnight before they were taken away Saturday by ambulances for burial.

Some Christians carried white sheets with the sign of the cross emblazoned on them with what appeared to be the blood of the victims.

Health Ministry official Osama Abdel-Moneim said the death toll stood at 21, with 79 wounded. It was not immediately known if all the victims were Christians. It was the deadliest violence involving Christians in Egypt since at least 20 people, mostly Christians, were killed in sectarian clashes in a southern town in 1999.

Mubarak vowed to track down those behind the attack, saying "we will cut off the hands of terrorists and those plotting against Egypt's security."

"This terrorist act has shaken the conscience of the nation," he said in a statement, adding that "all Egypt was targeted, and terrorism does not distinguish between Copt and Muslim."

The blast enraged Christians and stoked already strong sectarian tensions. Soon after the explosion, angry Christians clashed with police and Muslim residents, chanting, "With our blood and soul, we redeem the cross," witnesses said. Some broke in to the mosque across the street, throwing books into the street and sparking stone- and bottle-throwing clashes with Muslims, an AP photographer at the scene said.

Police fired tear gas to break up the clashes. But tempers remained high: In the afternoon, hundreds of Christians remained massed inside the church and outside on the street, where they jostled with lines of riot police, chanted, and waved crosses and pictures of Jesus.

In a reflection of the deepening mistrust between Egypt's communities, many in the crowd believed police would not fully investigate the bombing, reflecting Christians' suspicions that authorities overlook attacks on their community.

Archbishop Arweis, the top Coptic cleric in Alexandria, said police want to blame a suicide bomber instead of a car bomb so they can write it off as a lone attacker. He denounced what he called a lack of protection.

"There were only three soldiers and an officer in front of the church. Why did they have so little security at such a sensitive time when there's so many threats coming from al Qaeda?" he said, speaking to the AP.

Police initially said the blast came from an explosives-packed vehicle parked about four meters (yards) from the church. But the Interior Ministry said later in a statement that there was no sign that the epicenter was a car. That "makes it likely that the explosives ... were carried on the person of a suicide attacker who died with the others," it said.

Around six severely damaged vehicles remained outside the church, but there was little sign of a crater that major car bombs usually cause. Bits of flesh were stuck to nearby walls.

He offered no evidence to support his claim, but a recent spate of attacks blamed on al Qaeda against Christians in Iraq have an unusual connection to Egypt.

Al Qaeda in Iraq says it is attacking Christians there in the name of two Egyptian Christian women who reportedly converted to Islam in order to get divorces, prohibited by the Orthodox Coptic Church.

The women have since been secluded by the church, prompting Islamic hard-liners to hold frequent protests in past months, accusing the Church of imprisoning the women and forcing them to renounce Islam.

Al Qaeda in Iraq says its attacks on Christians would continue until Egyptian Church officials release the two women. The Church denies holding the women against their will.

Egypt faced a wave of Islamic militant violence in the 1990s, that peaked with a 1997 massacre of nearly 60 tourists at a pharoanic temple in Luxor. But the government suppressed the insurgency with a fierce crackdown, and militant violence all but stopped until a series of bomb attacks against tourist resorts in the Sinai Peninsula between 2004 and 2006.

Those attacks in the resorts of Dahab, Taba and Sharm el-Sheikh, which included suicide bombers and killed a total of 125 people, were blamed by the government on local extremists in an attempt to deflect concerns that al Qaeda had established a presence in Egypt.

Egypt has seen a string of attacks on Christians in recent years, most notably, in January 2009, when seven Christians were killed in a drive-by shooting on a church in southern Egypt during celebrations for the Orthodox Coptic Christmas.

Christians, mainly Orthodox Copts, are believed to make up about 10 percent of Egypt's mainly Muslim population of nearly 80 million people, and they have grown increasingly vocal in complaints about discrimination. In November, hundreds of Christians rioted in the capital, Cairo, smashing cars and windows after police violently stopped the construction of a church. The rare outbreak of Christian unrest in the capital left one person dead.