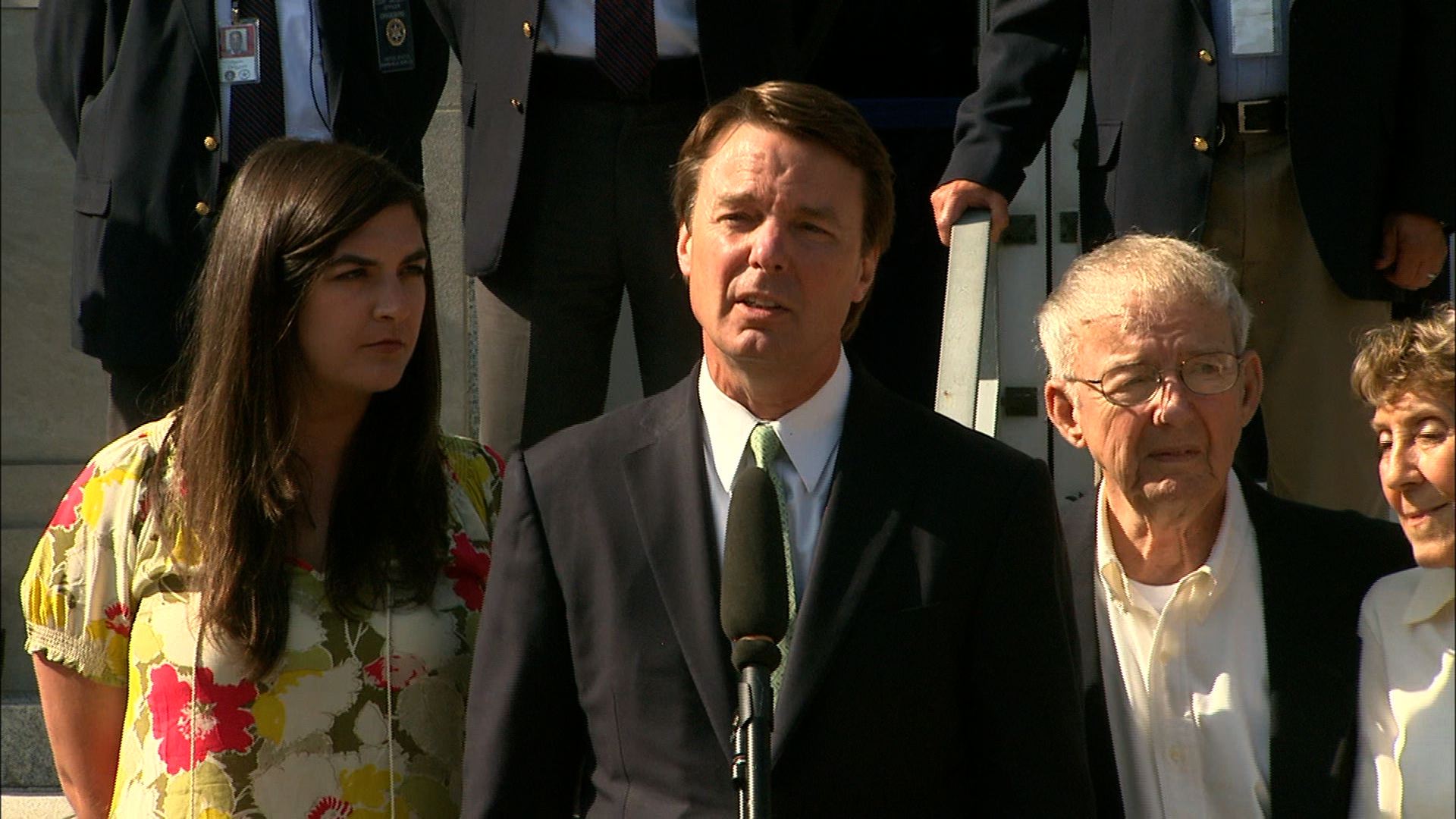 (CBS News) After nine days of deliberation over a case that proved at times both bizarre and sordid, a jury on Thursday found John Edwards not guilty on one of six charges of campaign finance corruption. A mistrial has been declared on the other five counts.

After initially announcing Thursday afternoon that it had reached a unanimous verdict on only one of six chargesagainst Edwards, the judge sent the jury back to continue deliberations on the remaining five counts. Shortly thereafter, the jurors said they were deadlocked on those counts. Subsequently, a verdict of not guilty was announced on the third count against Edwards, and a mistrial was declared on the remaining five counts.

The third count, of which Edwards was declared not guilty, charged that he had accepted and received illegal campaign contributions in 2008 from Rachel "Bunny" Mellon.

Speaking in front of the courthouse after the verdict and mistrials were announced, Edwards praised the jurors for their "incredibly hard work and their diligence" in the case, and delivered an emotional thank you to his children -- including Cate, who accompanied him to court nearly every day of trial, and Quinn, the daughter he had with his mistress, Rielle Hunter.

The former North Carolina senator, two-time presidential candidate and 2004 Democratic vice presidential nominee said he had done an "awful, awful lot that was wrong," and delivered a conciliatory speech about personal responsibility.

"I want to make sure that everyone hears from me, and from my voice, that while I do not believe I did anything illegal or ever thought I was doing anything illegal, I did an awful, awful lot that was wrong," Edwards said. "And there is no one else responsible for my sins. None of the people who came to court and testified are responsible; nobody working for the government is responsible."

"I am responsible," he said, "and if I want to find the person who should be held accountable for my sins, honestly, I don't have to look any further than the mirror."

Standing beside his daughter Cate, who has been a fixture at his side throughout the trial, Edwards expressed hope that he could dedicate his future to raising his children and helping those in need.

"I don't think God's through with me. I really believe he thinks there's still some good things I can do," he said.

The prosecution must now decide whether to retry the remaining five charges, unless the judge dismisses the case.

A government source, however, tells CBS News it is "unlikely" the Department of Justice will retry Edwards. After the lengthy, controversial, and high-profile trial, Stan Goldman, a law professor and criminal law expert at Loyola Law School in Los Angeles wonders "if it would make any sense to do it again." "This is not a murder case. This is not kidnapping. This is a close call on a political financing case where experts in the area seem to be highly divided on whether a rule was violated," Goldman said. "It strikes me as an abuse of discretion to retry a case like this unless a jury was hung 11-1 or 10-2" on one more more of the counts.

"There's always a chance the government may attempt to retry this. They're going to obviously assess the cost involved," said Elliot Berke, a partner at the law firm McGuireWoods and co-chair of the firm's Political Law Group. "This was a difficult case for the government to prove. I'll be very interested to see what the jurors say."

It's not yet clear what the breakdown of votes was among the jurors on the various counts. But ultimately, Berke says, Edwards' own remarks Thursday afternoon may help him put the case to bed for good.

"John Edwards was always a great trial lawyer and his statement today may have been his best closing argument," Berke said. "He did not point his finger at the government -- he pointed the finger at himself. He called himself a sinner. And I think the government will pay attention to that in whether or not to try the case again."

Edwards was indicted in a federal court last June on six counts alleging his complicity in a scheme to cover up an extramarital affair and its resulting pregnancy while he was running for the 2008 Democratic presidential nomination.

The indictment against Edwards charged that nearly $1 million worth of contributions provided by prominent Edwards donors Mellon and Fred Baron, which went toward helping former Edwards mistress Hunter and their child, amounted to campaign contributions because they were made with the purpose of protecting Edwards' presidential candidacy.

The Edwards campaign did not file the more than $900,000 as campaign contributions, and Baron said before his death in 2008 that he had provided the funds on his own and without telling Edwards. The money was not given to Edwards or Hunter directly, but rather funneled through several different people, including a former aide, Andrew Young, who at one point attempted to help Edwards cover up the affair with Hunter by claiming paternity of Hunter's child with Edwards. Young used much of the money to pay for the construction of a $1.6 million home for his family.

Pivotal to the prosecution's case was proving that the funds did qualify as campaign contributions and that Edwards accepted them with the knowledge that in doing so he was breaking the law.

Over the course of the nearly month-long trial, prosecutors argued that Edwards knew about the so-called "Bunny money," and that he was aware it was being used to help keep Hunter out of the public eye. This argument was supported by Young, who housed Hunter during part of the 2008 campaign, and later wrote a book about the ordeal. During several days of fraught testimony, Young argued that Edwards had recruited him to solicit secret donations for the purpose of covering up his affair.

Edwards' defense team argued that while the former senator was undeniably guilty of lying to his family about his affair, he did not knowingly violate federal campaign laws. Edwards' lawyers posited that Young, who was granted immunity in the trial, went behind Edwards' back to swindle Mellon out of hundreds of thousands of dollars for his personal benefit. Neither Edwards, Hunter, or Cate Edwards took the stand.

Had Edwards been convicted, Berke says, the case would have "marked a sea change in campaign finance law, in that anytime anyone made a payment or gave something of value to someone who happened to be a federal candidate it would bear scrutiny."

Unless Edwards is convicted in a retrial, however, Berke says such a change in precedent is unlikely. "I think the decision largely leaves the campaign finance landscape intact."

What Biden's new travel restrictions mean for you
Lucy Madison