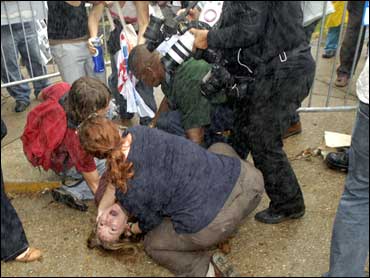 Despite occasionally violent protests outside, the City Council voted Thursday in favor of demolishing some 4,500 public housing units, a milestone in the city's effort to balance its heritage and its hurricane rebuilding efforts.

The unanimous vote to permit the federal government to tear down four public housing developments - a critical moment in a protracted fight between the U.S. Department of Housing and Urban Development and residents, activists and preservationists - followed hours of debate and periodic clashes in the street.

Police used chemical spray and stun guns as dozens of protesters tried to force their way into the packed City Council chamber. One woman was sprayed and dragged from the gates. Emergency workers took her away on a stretcher.

Another woman said she was stunned by officers, and still had what appeared to be a Taser wire hanging from her shirt.

"I was just standing, trying to get into my City Council meeting," said the dazed woman, Kim Ellis, who was taken away in an ambulance.

"Is this what democracy looks like?" Bill Quigley, a Loyola University law professor who opposes demolition, said as he held a strand of Taser wire he said had been shot into another of the protesters.

Protesters said they pushed against the iron gates that kept them out of the building because the Housing Authority of New Orleans had disproportionately allowed supporters of the demolition to pack the chambers.

After roughly 30 minutes of on-again-off-again struggle to get into the meeting, protesters fell back, continuously chanting with bullhorns. An afternoon storm thinned the demonstrators, some of whom had been waiting since 7 a.m. to enter, and the crowd disappeared altogether shortly after the afternoon vote.

At the peak of the confusion, some 70 protesters were facing about a dozen mounted police and 40 more law enforcement officers on foot.

Details on arrests were not immediately available.

The meeting itself was mostly peaceful, although an early fight in the chambers between protesters and police caused a brief interruption.

Some public housing residents repeated during the daylong debate that they welcome the plan to replace the decades-old structures with mixed-income housing.

Other residents and their advocates said they fear the plan will result in loss of badly needing housing for the city's low-income black residents.

HUD says about 3,000 families who once lived in New Orleans public housing remain scattered across the country, and social workers say the number of homeless people in the area has doubled to about 12,000.

The housing projects have long been a center for high crime, conditions made worse by damage from Hurricane Katrina, reports Mike Hoss of CBS affiliate WWL-TV. But HUD says the transition from housing projects to mixed income was underway long before the hurricane.

There is no consensus on what's best for New Orleans' poor, even among public housing residents. Redevelopment would diminish the public housing stock and drive many into less stable voucher programs. Repair of brick and barracks-style projects badly damaged by Hurricane Katrina would keep intact poor but close-knit neighborhoods.

Mayor Ray Nagin said the resolution approved by the council includes language that will assure that public housing residents have a voice in the redevelopment plans.

Opponents were not immediately available for comment on the decision.

Thursday's vote was required before demolition work could begin, but several legal challenges to the plan have not been resolved.