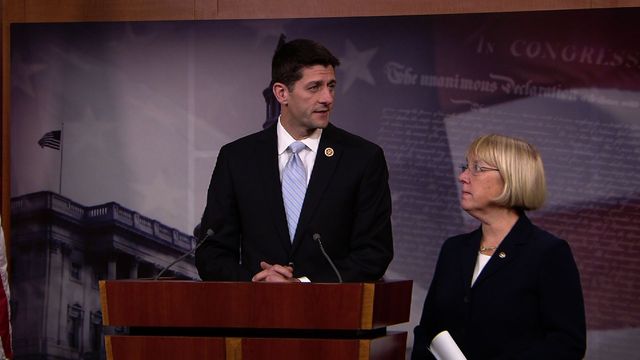 Even with a budget deal announcement Tuesday, experts say longer-term solutions still need to be addressed.

The chairs of the House and Senate Budget Committees Rep. Paul Ryan, R-Wis, and Sen. Patty Murray, D-Wash, outlined a deal that will set spending levels for the next two fiscal years.

The modest plan will avoid another government shutdown by replacing the sequester with alternative spending cuts. It provides $63 billion of sequester relief, $23 billion in net deficit reduction, and $85 billion of total savings.

The 29-member conference committee was formed in response to the partial 16-day government shutdown in October that initially furloughed around 800,000 federal workers.

Michael Peterson, president of the Peter G. Peterson Foundation, a nonpartisan organization that raises awareness of America's long-term fiscal challenges, released the following statement shortly after the deal was reached:

"This bipartisan deal looks like a good step, but it doesn’t address the real drivers of our long-term debt. We should all welcome our lawmakers coming together on a budget agreement that would end the recent cycle of governing by crisis. But make no mistake — we still have a lot more to do to put our nation on a sustainable fiscal path. I’m hopeful that this agreement will lay the foundation for future bipartisan collaboration to stabilize our national debt for the long term."

"The fundamental structural problem is this entitlement growth coming in the future and we just have to decide as a nation what level of benefits we want, what ages we want those to kick in, what level of income we want people to receive benefits under, and how we want to pay for it. And that can is being kicked down the road over and over again because most people in Washington don’t want to deal with it," Peterson told CBS News, adding that other key issues including health care costs and tax reform must also be addressed.

Decisions on reforming the Social Security, Medicare, and Medicaid systems are crucial in the next few years according to Mark Zandi, chief economist of Moody's Analytics.

"If those programs are not changed, given the demographics, given that there are a lot of people in the baby boom generation that are approaching retirement, it is going to overwhelm our fiscal situation. So we have to make changes to those programs to make them more solid," Zandi said.

Both negotiators, Ryan and Murray, were happy a compromise was reached and acknowledged that this is just the "first step."

These beginning agreements might bring comfort to some, but according to Peterson another temporary fix will deprive the economy of two things it craves – confidence and certainty.

"These short-term fixes don’t really do anything. They get us past the crises of the day, but they don’t put us on a path where people know what they are going to get into, and what their tax rates are, and have some degree of confidence in the future so that they can make plans, invest in the economy and help it grow."