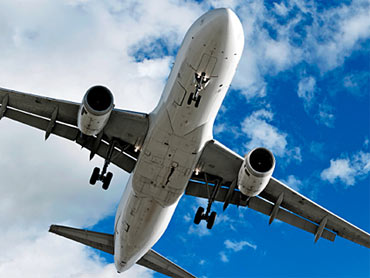 The holidays are a tough time to keep an eye on your weight, but it can be rougher when you'resitting on a plane, or stuck at the airport. So, how can get control of what eat when you're on the go?

CBS News Medical Correspondent Dr. Jennifer Ashton offered tips on "The Early Show" Monday to help you avoid breaking your diet while you're traveling -- and it might not be as tough as you think.

Ashton explained that in-flight options have really changed over the years, with airlines offering things like hummus, olives and yogurt parfaits now.

According to the website, DietDetective.com, the top three airlines in this area are United, followed by JetBlue and American Airlines. The meal choices on these carriers, she said, included turkey sandwiches, salads, fruit trays and nuts, which are all healthy snacks on and off a flight.

What's the healthiest airport when it comes to food? A different survey, Ashton said, dubbed the Detroit Metro Airport the healthiest, with 52 of its 54 restaurants offering at least one healthy option.

What are the diet traps people most often fall into at the airport and in the air?

Following your nose: Ashton said, "The smells of cinnamon buns and buttery pretzels can make the strongest dieter to break. One of those cinnamon buns delivers over 1,000 calories."

Stress eating: "We tend to crave calorie-rich foods when we're worried," Ashton explained. :But, emotional eating won't help you get to your destination any faster -- and the food that you ingest may upset your stomach and give you indigestion."

Forgetting serving sizes: "Food can come packaged -- even in those snack boxes on planes. Check the nutrition labels. You can be swayed by thinking that bag of dried fruit is healthy, but it might contain a portion size to feed a whole family."

What are some good options at the airport?

Ashton observed, "The good news is, is that airports and the vendors at airports are really savvy now, and know people are looking for healthier choices, so they are there, you just have to really spends time and maybe put a little effort to finding them. (Good options) could be anything from yogurt to the energy bars; they are all over the place at airport vendors. You can even bring dried cereal from home or find prepackaged dried cereals, obviously fruit or even things like sandwiches. If you want to stay away from the bread, you can peel it away, even with a wrap."

"Early Show" co-anchor Harry Smith remarked, "From home is really an important way to sort of really beat the hassle of being in those lines."

"Absolutely," Ashton said. "Not only can you save money and watch your calories bringing things from home, again, obviously not liquids because you have to clear the security checkpoint before you take that onto the plane, but you can bring whatever you want from home. We have to remember a lot of people fly with chronic medical conditions, they might be very sensitive to salt, they may have food allergies, bringing things from home can not only save you money, it can be healthiest thing to do."