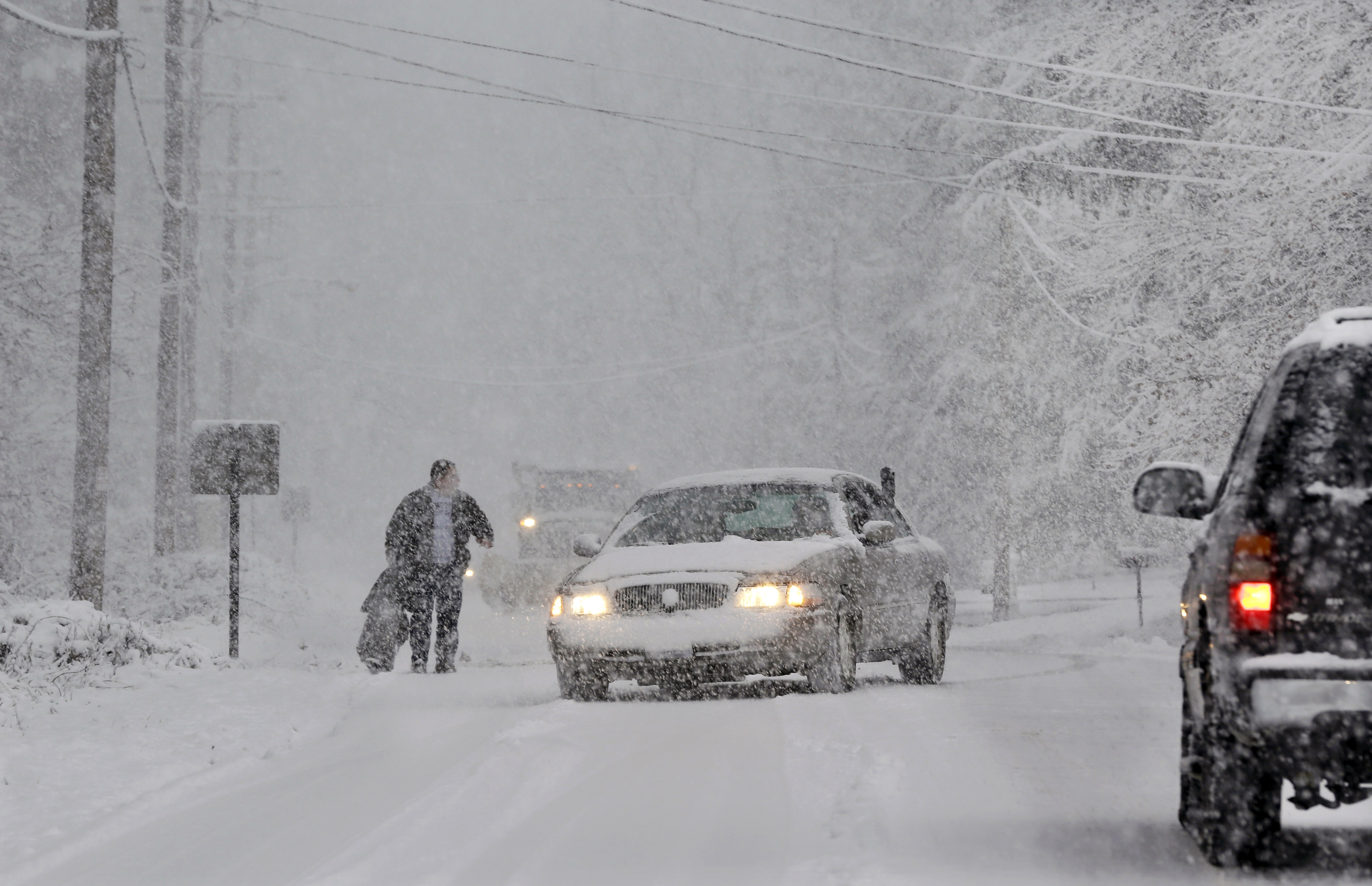 PROVIDENCE, R.I. - A snowstorm pushed into New England on Tuesday, making for messy travel conditions after causing widespread school and government closures in the nation's capital and elsewhere along the Eastern seaboard.

With snow totals measured in inches instead of feet, the storm was more nuisance than menace, but it was timed to hit morning and afternoon commutes in the densely populated Northeast.

Hundreds of transportation crews were out treating and plowing highways in New England, where up to 4 inches of snow was expected in some places. State police in Connecticut said there had been more than 80 crashes by late morning, with eight minor injuries.

Public schools were closed in Washington, D.C., Philadelphia and parts of Delaware, Maryland, West Virginia, Kentucky and Tennessee. Some schools in Connecticut were closed, while a few districts in Rhode Island and southeastern Massachusetts planned early dismissals or canceled afternoon activities.

At least 4,000 flights were canceled or delayed, with many delays were reported in Philadelphia and New York City-area airports. Some travelers at Newark Liberty International Airport in New Jersey had five-hour waits. Traveler Gabrielle Morris was trying to stay optimistic.

In Washington, snow was falling at daybreak, but traffic problems failed to materialize as many workers stayed home. Non-emergency federal employees were granted an excused absence and others were told to telecommute, according to the U.S. Office of Personnel Management.

Philadelphia, which was socked by a surprise 8-inch snowfall on Sunday, has had more snow this week than all last winter. New York City, which was forecast to get 3 to 5 inches, suspended some parking rules to facilitate snow removal.

The storm made the morning commute trickier for motorists in the New York City area.

"You have to respect the weather because the weather is going to win," cab driver Richard Groen told the station. "But I’m a veteran New Yorker — born here, raised here, lived here. I've made snowmen on Broadway in the middle of the day."

Foul weather has caused several traffic pileups this week, including a 30-vehicle wreck Tuesday in Rockford, Mich. Another chain-reaction crash killed one person in Germantown, Wis.

In Connecticut, Rhode Island and Massachusetts, meteorologists predicted the snow would taper off around the time commuters headed home for the day, but roads and sidewalks were expected to remain slick.

In Ohio, overnight snowfall made the morning commute slow and messy in central and southwest parts of the state.

Outside Washington, traffic was light Tuesday morning. With temperatures hovering around freezing, highways that had been plowed and treated were passable, but conditions began to deteriorate after 8 a.m. as the pace of the snowfall increased.

The usually bustling Springfield Metro station was nearly deserted. Those who did have to work said the lack of traffic made the slushy roads easier to navigate.

"I wish it was like this all the time - minus the snow," said Maelin Traylor, 28, of Springfield. "The traffic was wonderful."

Rick Hemphill, a retired deputy court clerk, had a busy Tuesday morning ferrying family members to and from their jobs in rural Washington County, Md., through several inches of fresh snow. He said he grew up driving in snow in mountainous western Maryland.

"Snow is snow," Hemphill said as he refueled his four-wheel-drive vehicle near his Hagerstown-area home. "The closer you get to the city, it gets worse because they get it less often."

In Newark, N.J., on Tuesday morning, a squad of cheerleaders ages 11 to 15 was looking forward to escaping the cold as they waited for a train to take them to Florida for the national cheerleading championships. Luckily, the trains were generally on time despite the weather.

Tuesday's storm offered up a sense of levity and fun for Rachel Ezekiel-Fishbein compared with Sunday's squall, which hampered her travel plans to Baltimore for a wedding. Schools in her hometown of Cheltenham, just north of Philadelphia, were closed.

"Got the call from school at 5 a.m., rolled over and went back to sleep 'til 9," she said. "Kids are out sledding and I'm working and making a pot of soup. Yep, I'm loving this snow day!"

Forecasters said more wintry weather could be on the way for the region this weekend.