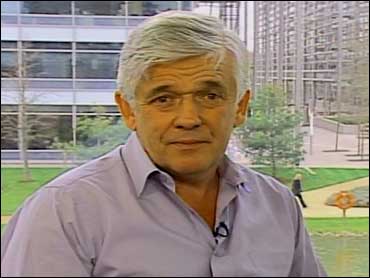 When I was in Moscow recently, I met a man who told me an interesting story about life in Russia today. He said he had driven the streets of Moscow for twenty years, and had been regularly stopped for traffic misdemeanors.

He had never been to court though. Each time he produced his wallet, paid off the traffic cop, and went on his way.

Such stories hardly raise an eyebrow in Moscow, because Russia is a country where everything is on sale. Even the new president Dmitry Medvedev says it is the most lawless in the world. And as a man elected with the aid of one or two dubious electoral procedures, he should know. If you want to get your child to the right school, if you want the the right appointment with a doctor, if you want indeed the help of any official, then be prepared to take out your wallet and pay -- in cash.

To a Westerner like myself, it was all shocking. But then, as my friend with the perfect driving record said to me -- Peter, this is not the West, it is the East, and in the East this is the way it is. And, he went on, even if you add the cost of bribes to my tax, I am still paying less than you each month.

A brief drive through the streets of Moscow illustrates that it isn't. Life on the road in Russia is extremely dangerous. They have a population of about 140 million spread across a vast country, and each year 30,000 of those citizens die on the roads. That's a casualty rate five times that of my country.

Even the traffic police regularly get wiped out by the mad and the bad on the roads of Russia.

And why are standards of driving so poor? Why are the roads so dangerous? Because, of course, no one takes any notice of the rules. That is what happens when the system is corrupt.

Perhaps that is one reason why a people with so much space, so many resources, so much natural gas and oil under the soil, are still in many cases in poverty. Corruption does not ease the wheels of commerce, it clogs them up. There are plenty of countries across the world which seem to exist and even prosper despite the extent of corruption, in the same way that there are many which prosper despite the lack of democracy. The two factors often of course go together.

But in the end it's our way which works, our way which is more efficient. There are of course plenty of faults in our system and yours, plenty of examples of corruption and inefficiency, plenty of bad and dangerous driving as well, plenty of problems in our strange system of picking a leader -- but I came back to Britain with a sense of relief. It is not very trendy to say, but both our countries have much to be proud of.
By Peter Allen