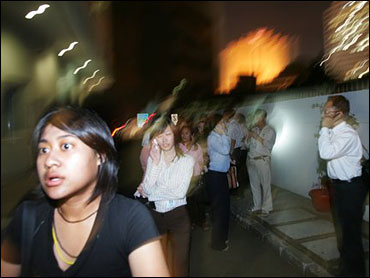 A massive earthquake killed at least 10 people, injured scores and triggered a small tsunami in western Indonesia on Wednesday, authorities said. Warnings of potentially destructive waves were issued across the Indian Ocean region.

The 8.2-magnitude quake off Sumatra island damaged malls, mosques and car dealerships along the coast and could be felt in at least four countries, with tall buildings swaying as far as 1,200 miles away.

It was followed by a series of powerful aftershocks, including a magnitude-6.6 quake that briefly triggered a second tsunami alert in Indonesia, said Suhardjono, a senior official at the local meteorological agency.

At least seven people were killed in the town of Bengkulu and surrounding areas, Social Affairs Department official Felix Valentino told the news portal detik.com. In Padang, 240 miles away, three bodies were pulled from badly damaged buildings, a witness said.

Excavation machinery was being used to search through the rubble for survivors.

The U.S. Geological Survey said the initial undersea quake, centered 65 miles southwest of Bengkulu on Sumatra island at a depth of 9.7 miles, had a magnitude of 8.2.

"We received a report 20 minutes after the quake that a one- to three-meter (yard) wave hit Padang," said Suhardjono, an official with Indonesia's meteorological agency who goes by only one name. "But communication has been difficult since then."

As far away as Kenya, the government asked all people to evacuate from beach areas and issued a tsunami warning following the quake and afthershocks. A statement on the government's Web site said "a massive tsunami is expected to hit the Kenyan coast at 11.39 p.m. tonight (4.39 p.m. EDT)."

The Geological Survey said the underwater quake hit at about 6:10 p.m.

"Everyone is running out of their houses in every direction," according to Wati Said, who spoke by cell phone standing outside her house in Bengkulu. "We think our neighborhood is high enough. God willing, if the water comes, it will not touch us here."

"Communication is cut, we can't call out," she added. "I don't know how you contacted us. Everyone is afraid."

The temblor could also be felt in the Indonesian capital, Jakarta, where office workers streamed down the stairwells of tall swaying buildings.

A 7.5-magnitude earthquake hit the island in August. That temblor was centered 66 miles east of Jakarta at a depth of around 180 miles, the USGS said.

A massive Dec. 26, 2004, earthquake that triggered a tsunami off the coast of Sumatra that killed more than 131,000 in Indonesia's Aceh province registered magnitude 9.0 and was 18 miles deep, according to USGS.