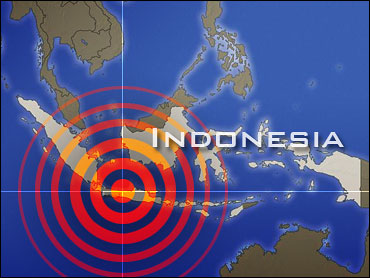 The temblor had a preliminary magnitude of 7.5 and was centered 66 miles east of Jakarta at a depth of around 180 miles, said the U.S. Geological Survey.

Residents said tall buildings and single story homes were rattling in the city of 9 million and that some people were screaming "Allah Akbar" or "God as great" as they ran outside.

The quake was felt throughout much of the heavily populated Indonesian island Java and as far away as Malaysia, said Don Blakeman, a geophysicist at the U.S. National Earthquake Information Center in Golden, Colorado.

Because of the earthquake's depth, there was little risk of a tsunami, said Robert Cessaro, a geophysicist at the Pacific Tsunami Warning Center in Hawaii.

None of the instruments closest to the earthquake indicated that a tsunami was triggered, Cessaro said, although he added that there were no instruments "very close" to the quake's epicenter.

The depth of the earthquake "suggests there will be no tsunami," he said.

The Dec. 26, 2004, earthquake that triggered the tsunami off the coast of Sumatra and killed more than 131,000 in Indonesia's Aceh province was just 18 miles in depth, according to the USGS.

"Because this earthquake was so far below the ocean bottom, it didn't trigger a tsunami or cause a lot of damage," said John Bellini, a geophysicist with the National Earthquake Information Center.

"The earthquake center in 2004 was close enough that it actually ruptured the surface of the sea floor, which caused a tsunami. This one was felt by people on the ground, and it shook buildings, but it was too deep to cause the ocean bottom to move."