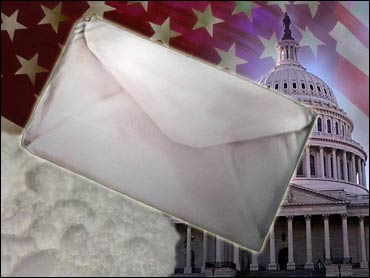 A white powder, which preliminary tests indicated could be the deadly substance ricin, was discovered Monday in the office of Senate Majority Leader Bill Frist, R-Tenn., in the Dirksen Senate Office Building.

A government official said further tests were being conducted at Fort Detrick in Maryland, with more definitive results expected by Tuesday.

The powder was found in an envelope in Frist's office suite on the fourth floor of the Dirksen building, one of three structures occupied by senators and their staffs, said a congressional source speaking on condition of anonymity.

A number of the senator's staff members who were in the office at the time are being held on a different floor of the building pending test results on the substance, reports CBS News Capitol Hill producer John Nolen.

The senator's office is now cordoned off as a crime scene, and the fourth floor was evacuated, although the Dirksen building was not evacuated, reports Nolen.

Ricin, derived from the castor bean plant, can kill within days. Twice as deadly as cobra venom, ricin is relatively easily made. It may be inhaled, ingested or injected.

Police found traces of ricin in a north London apartment last January and arrested seven men of North African origin in connection with the virulent toxin that has been linked to al Qaeda terrorists and Iraq.

A package containing ricin was also found at a post facility serving Greenville-Spartanburg International Airport in South Carolina in October.