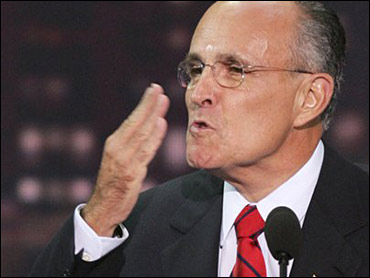 This column from The Weekly Standard was written by Hugh Hewitt.

Not since 1952 has a presidential election lacked a sitting president or vice president as a contestant, and Ike was about as close as one could get to non-official incumbent. Before that, it was the 1928 race, and there, too, Herbert Hoover was, like Ike, a figure of towering popularity. In other words, there has never not been a front-runner in at least one party in the modern scrambles for the presidency. Here is a bit of evidence that the race for 2008 also has a leader, one along the lines of Eisenhower and the Great Engineer.

The National Federation of Republican Women is one of those groups about which not much is ever written, but which functions as one of the circulatory systems of American politics. There's a Republican Women's, Federated in practically every county of every size, and their monthly gatherings are full of the stuff of Tocqueville. These are the precincts of the proverbial "blue haired legions," but also younger, more partisan activists as well.

I make a point of speaking to a couple of chapters of the Federation every year, more to listen than to inform. (These ladies have legislative chairman's reports that go on for an hour -- and they take notes.) Last Monday, just before heading off on vacation, I went to Temecula, California to speak to more than 200 women from the Riverside County Republican Women, Federated. After a recap and an assessment of Arnold Schwarzenegger's plans for a special election in 2005 to confront gerrymandering, I announced the first straw poll of 2008. By a show of hands, I gave the ladies -- and a handful of men who were their guests -- four choices: Senator John McCain, former NYC Mayor Rudy Giuliani, Senator Bill Frist, and "other." The results astonished me.

Riverside county is as "red" as any county in America, and getting redder. Before I spoke, the group had been entertained by the local home-schooling association's girls' choir, and many of the questions I received concerned illegal immigration and Hillary Clinton's ambitions. In other words -- this is to use the title of John Podhoretz's invaluable book on places such as Riverside County, Bush Country.

Giuliani swept more than three-quarters of the votes, with the other three choices receiving smatterings of support. Keep in mind that this isn't an exercise in name identification -- these women knew each of the candidates -- as well as every possible name in the "other" category. This was an informed choice. I stopped what I was doing, repelled the audience, and then conducted a focus group.

Like many other pundits, I have been wondering whether Giuliani can escape the snows of Iowa and New Hampshire in 2008 given that Pat Robertson won the former in 1988 and Pat Buchanan the latter in 1992. Giuliani is too "moderate" to win the GOP nod, right?

Wrong, if these ladies are to be believed. Among the many praises that gushed forth: decisive, experienced, loyal to "W" -- an interesting positive, that -- funny and, crucially, tough enough to take on the Clintons. There were many praises for Senator Frist, and some for John McCain, but Giuliani has their hearts -- already.

I long ago revealed myself as a single-issue voter: I favor the most conservative Republican in the primary most likely to win the general election. The GOP has never had many of what I call this orientation: principled pragmatists. In fact, a debate is raging even now among bloggers such as Patterico, PrestoPundit, CalBlog, In the Agora, and Interocitor, over the arguments for principled pragmatism that I laid out in my last book.

But if the ladies I spoke with on Monday are any indication of a trend -- and there are excellent reasons to conclude that they are -- the battle may already be over. For Giuliani to consolidate his position with the center-right would only require some deft appearances during the coming struggles over Supreme Court nominees. If he wades into the fray to help confirm the president's nominees, his personal views on abortion will matter far less than if he is absent from these fights. He would also find it useful to get on the side of allowing the people a vote on the defense of marriage amendment through the process of state ratification or denial of ratification to a proposed amendment.

Senator Frist seems to have sensed that the race for the 2008 nomination is already launched, and has responded with tough stands on the "nuclear option" for the judicial nomination process and a rousing defense of the Boy Scouts. Very sharp moves that reflect he is in this for good. The same cannot be said for Senator Hagel who only seems to make news when throwing stones at Bush or the Iraq effort. Bush is the unquestioned hero in the hearts of the activists, and while 2008 is a long way away, that course is much shorter than it used to be because impressions are made early.

A final note: There is little upside in being coy anymore. The candidates will almost all blow off the primary caps and raise money as Dean and Bush did in 2004, and that means an early launch in fundraising and organization. Candor is increasingly a valued trait, and the fan dance of yesteryear seems trite. I have blogged on the need for would-be nominees to scout out and sign the next generation of internet talent, especially in the area of fundraising and grassroots communication, and the Shrum Primary of 2003 may be replaced by the Ruffini Primary of 2005. We'll know for sure who is serious when the candidates launch their blogs.

I wouldn't be surprised to see a Giuliani blog up and running in January. The ladies of the Riverside Republican Women Federated would welcome it.

Hugh Hewitt is the host of a nationally syndicated radio show, and author most recently of "If It's Not Close, They Can't Cheat: Crushing the Democrats in Every Election and Why Your Life Depends Upon It." His daily blog can be found at HughHewitt.com.