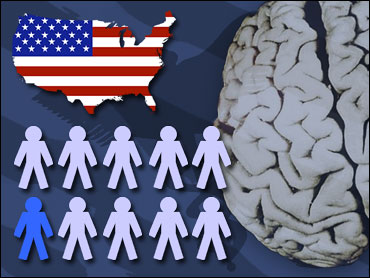 The number of Americans with Alzheimer's is soaring. It's expected to hit sixteen million by the middle of this century, more than triple the current total.

More and more victims of this incurable disease will be shockingly young.

For Bob Balfour, the scary reminder is every time … he just can't remember.

"I'll go down into the basement to where my tools are, and I'll forget what it is," he told Strassmann.

Bob has Alzheimer's disease and while it's usually thought of as disease of the elderly, that's not necessarily so.

Bob's wife Trish - and a bulletin board in their kitchen - plan his every move.

Physically, Balfour's in great shape, but as a construction manager, he started making math mistakes. He was fired. Doctors eventually diagnosed the underlying issue.

He's one of a half-million Americans with early-onset Alzheimer's, people under 65 with the disease. Ten percent of all Alzheimer's patients get it early - the youngest on record was seventeen.

"People are still working, they have families, it affects them in a much different way than if they'd been retired for ten years as is often the case," says Dr. Alan Levey, director of Alzheimer's Research at Emory University.

So their father has to care for his son, just as he did for his wife.

"As the dad, are you prepared for that," Strassmann asked Bob Balfour, Sr., "if both sons progress?"

Bobby Balfour, Bob's 18-year-old son, needs to prepare himself, too. Genetically, he has a fifty-fifty chance of getting the disease.

"So yeah, that certainly comes into your mind," he told Strassmann, "but I guess there's a lot of optimism as well in my family."

They're a positive family, pushing for research on drugs to slow Bob's disease and hoping for a miracle. But no one outruns this disease. No one survives Alzheimer's.

Sitting down with Bob and Trish, Strassmann told them that their son said his parents were madly in love with each other.

"We are," Trish agreed with a laugh. "We really are. It's hard for me, but then, the good part is - that I've been married for twenty-three years to my best friend. If I spend the rest of these eight or ten years that I have left with Bob being upset, being depressed, I'm going to miss out on some wonderful times with him."

They're in this for the long run, they say, however long it goes.