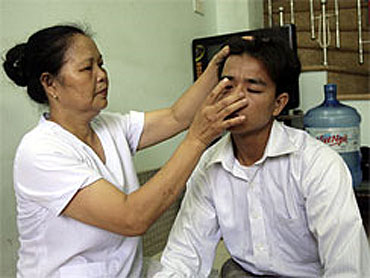 (CBS/AP) The  female acupuncturist who led the way for the exoneration of three convicted rapists in Vietnam is now the go-to girl for jailed rapists who say they're innocent in that country.

She's been made a national celebrity after  being interviewed and profiled in local papers and even on the Internet. Now felons are clamoring for her attention.

She said she fought for them because she believed, after examining their ears and taking their pulse rate, that they were virgins.

"They all had small red spots on the back of their ears," said Hong, 54. "The spots should have disappeared if they had had sex. My many years of experience told me that these men did not have sex before."

Hong's determination to have the case reopened - she even threatened to light herself on fire - led prosecutors to re-examine the case and, ultimately, free the men from prison.

Her virgin-detecting claims have drawn skepticism from other traditional medicine practitioners, who work with needles, herbs, and other methods using centuries-old techniques to manipulate energy, or chi, in the body.

"I have never heard of this method before," said Nguyen Van Hao, 60, an acupuncturist who has practiced for 14 years. "From the medical point of view, it's impossible to determine whether a man having sex or not by feeling the pulse or examining the red spot on their ears."

Hong says she discovered the spot on convicted rapist Nguyen Dinh Kien's ear the first time he visited her for treatment four years ago. He  was serving a 16-year sentence after being convicted of gang raping a 20-year-old woman.

He insisted he was innocent, and, after seeing the spot on Kien's ear, Hong believed him. She later examined  his two alleged accomplices and campaigned for their release.

Investigators who revisited the case discovered flaws, according to the local newspaper. The three men, having served 10 years in jail, were released in January.

Vietnamese newspapers have dedicated profiles to the traditional healer, and earlier this week, she went on an online chat  where readers expressed admiration for her efforts.

"I'm not planning to launch a campaign to clear innocent people who were falsely convicted of rape," she said. "But I'm willing to help people to prove their innocence, if they really are."