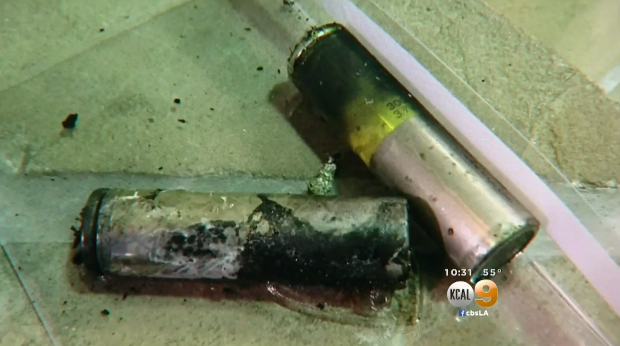 An Orange County, California, teen is recovering from burns after an e-cigarette exploded in his pocket.

CBS Los Angeles reports that the 19-year-old was at work at an Albertsons supermarket in Ladera Ranch Monday evening when one of the two e-cigarette batteries in his pocket blew up after coming into contact with his keys, according to Capt. Steve Concialdi of the Orange County Fire Authority.

The exploded unit blew about 15 feet down an aisle at the grocery store, Concialdi said.

"The batteries exploded and it burned his leg pretty bad. It shot off almost like a bottle rocket," Albertsons employee Jeremy Fleming said.

"The battery heated up and just blew out of his pocket, and one of my coworkers said it shot right at him," said another employee, Mitch Landingham.

The victim was taken to Mission Hospital where he was treated for first and second-degree burns on his thigh and then released.

Landingham described his coworker's injuries: "There was just like a huge black circle and almost like a rocket mark on his leg," he said.

And it's not the first report of e-cigarettes malfunctioning and injuring people.

Last February, a 17-year-old boy was injured while smoking an e-cigarette in Anaheim, California.

In March, CBS Los Angeles reports a Santa Ana man was injured after his e-cigarette blew up in his hands. The explosion sent half of the electronic smoking device into the ceiling and started a fire at his apartment.

And a Colorado Springs man was seriously injured in November when an e-cigarette exploded in his face, leaving him hospitalized with a broken neck, facial fractures and burns.

Fire officials are warning e-cigarette users to keep batteries away from copper or metal, steer clear of discount batteries and carry e-cigarettes separately from the body.

Because of the potential fire hazard, the federal government recently banned e-cigarettes from checked luggage on aircraft. The Department of Transportation said it had reports of least 26 incidents since 2009 in which e-cigarettes had caused explosions or fires.